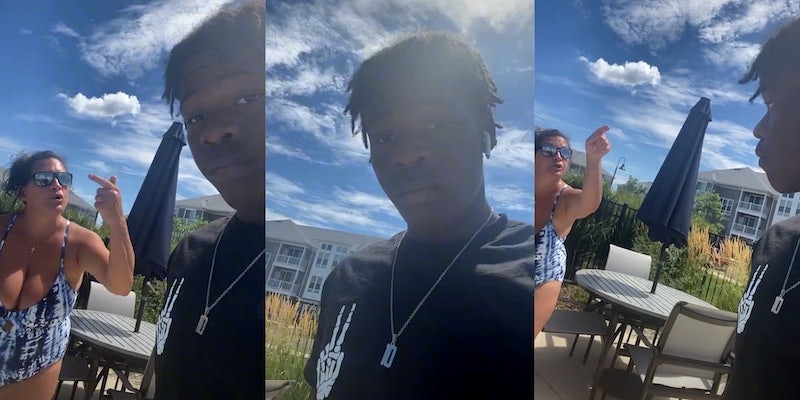 'Pool's closed for you.'

A woman, dubbed a “Karen,” was filmed telling a Black worker the pool is closed only for him. He revealed he is the lifeguard at the pool, questioning, “How u gone tell the lifeguard the pool closed lol.”

The most viral video featuring the woman on the lifeguard’s TikTok account was viewed over 1 million times.

“Ok, if you got a problem, you get the fuck outta here, pool’s closed for you,” the woman says to him in the video.

The TikToker responds, “You on camera, too, Miss.”

She answers, “Good, you’re on camera, too. And you been on camera.”

While the main viral video is short, other videos posted to the TikToker’s account offers some additional context.

In another video the woman questions “This makes you happy?” and references another person. “She end up hurting herself ’cause she can’t stand in the pool?” she says.

The woman appears to be crying and calls the worker an “asshole” when another person, presumably another worker, tries to intervene.

“No! No, he’s a fucking asshole!” the woman tells the other worker, who responds, “He’s a child!”

The employee then says, “Then why are you talking to a child?”

In a third clip, @cal_capalot records the pool, which appears to be in a housing complex of some sort, and the woman says, “Stick it up that piece of shit’s ass.” She continues to yell as the TikToker says from behind the camera, “I done seen it all.”

In it, he says the woman brought her special needs daughter to the pool and that the daughter was swimming in the 6-feet deep end with her eyes closed.

“I walk over there. I tell her, ‘Ma’am your daughter is swimming in the 6 feet, I see that she can’t swim, so can you please like get in the water with her? And just stay arm’s length with her? Like just for safety?'” he recalls.

He says the woman refused. He says her daughter then came over to the lifeguard stand, where he was, and started pouring water on him and on his belongings.

“So then I asked the lady… ‘Excuse me ma’am—’ I’m like, ‘Can you please get your daughter. She’s pouring water on my stuff that I need.’ So she was like, ‘Oh you’re just a lifeguard; you only make $12.50 an hour. What could you possibly have in the bag?” he recalls.

He clarifies for viewers that he doesn’t even make $12 per hour. He says he then went to go get staffers in the office to help him.

“We had to kick her out of the pool. Turns out she wasn’t even a resident for the complex that I was guarding that day. So, we got her outta there. We actually had to call the cops on her for her to leave she wouldn’t leave. But yeah, that’s the storytime for how I first met a Karen,” he adds.

It’s unclear how old the TikToker is, but many viewers pointed to the obvious age difference between him and the woman, arguing she may not have had the “same energy” with an adult. In the follow-up video that shows the woman crying, viewers highlighted how she acted in typical Karen fashion, aka playing the victim after getting called out for not abiding by the pool rules. “[White woman] tears yet again,” one comment reads.

There were also viewers who thought the incident was racially motivated, highlighting the history of segregated pools that, in some instances, still persist “unofficially” today in the form of swim club/pool policies. “I don’t know what’s with them and the pool….If they don’t like it the should put one in the back yard and do what they want,” one viewer said.

The Daily Dot has reached out to @cap_capalot on TikTok for further comment.