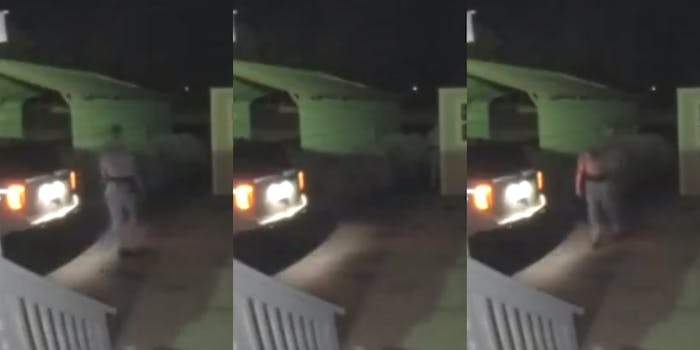 ‘This isn’t a police force. This is a gang’: Black councilman says cops urinated on his property

The councilman has been protesting the police killing of a Black man.

A Black city council member in Elizabeth City, North Carolina, believes local police are targeting him after he joined in protests against the fatal shooting of Andrew Brown Jr.

Gabriel Adkins said the Ring camera outside his funeral home caught uniformed officers pulling up to his property and urinating on two different occasions. Adkins has shared one of these videos publicly, while the other “is still being processed,” he told the News & Observer.

“Since this case with Andrew Brown, I’ve been out protesting,” Adkins said. “I really feel like they are retaliating back against me. Maybe they didn’t know I had surveillance, but it’s a funeral home.”

Brown was shot five times by Pasquotank County sheriff’s deputies as they served a warrant for his arrest on April 21. Brown’s family questioned the narrative put forth by police who claim they fired after Brown struck officers with his car.

The family’s attorney has said that the video of the shooting shows Brown trying to move his car away from the police after they opened fire. Protesters are demanding the body camera footage be released to the public, but so far, that has not happened. On Tuesday morning, the district attorney reportedly found Brown’s death “justified due to his actions.”

Adkins has been among the more vocal protesters of the shooting, not only attending events but helping organize them and speaking out publicly against the deputies’ actions. Since then, he says police have stopped responding to his funeral home’s requests for escorts and that officers have urinated on his property.

The video Adkins posted on Facebook shows a white man in a tan uniform getting out of a car and appearing to urinate on a shed on Adkins’ property.

“I’m just getting real worried I might be the next target, or they’re trying to set me up,” Adkins told the Observer. “On top of it being a crime.”

His story has sparked outrage online and only cemented some people’s beliefs that the police don’t exist to serve their communities at all.

“This is a gang running a protection racket under the color of law,” one Twitter user wrote. “Fire every single one of them AND their union stewards.”

Adkins is seeking counsel and plans to press charges over the incident.

Meanwhile, the protests against Brown’s killing and demanding the footage be released are expected to continue following the district attorney’s findings.