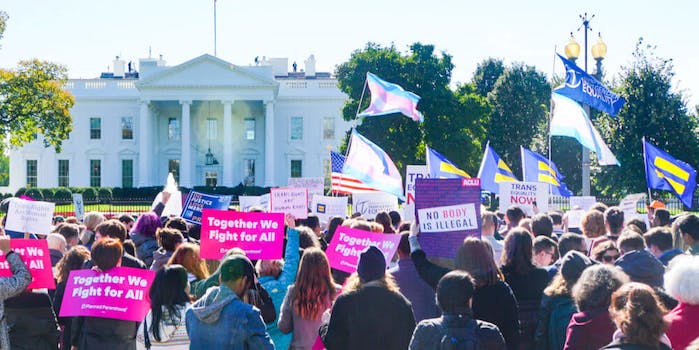 One of the victims was reportedly left with non-life threatening stab wounds.

Two transgender women were robbed at knifepoint after meeting a man through a dating app, LGBTQ Nation reports.

Police in Washington, D.C., are looking for a man who used the dating app Tagged to lure the women. The robber used a knife to take the first victim’s belongings and car on Oct. 7, according to police. Officials reportedly believe the same person is responsible for an additional Tagged-related robbery on Oct. 15, which left the victim with non-life threatening stab wounds.

MPD seeks the public's assistance in identifying a suspect in Carjacking and Robbery offenses that occurred in the Seventh District.

Around a month ago, in an unrelated attack, D.C. police arrested a man who assaulted and robbed a transgender woman. The Washington Blade reports that a video surfaced of the suspect saying he hates trans women during the incident.

The American Medical Association has deemed the rise in violence against trans people an epidemic after the 18th transgender person was murdered this year, the New York Times reported in September.

Since then, three more trans people have been murdered in the U.S., according to the Human Rights Campaign. Commenters on Reddit were unsurprised by the most recent D.C. attacks.

“I don’t think anyone is surprised, unfortunately,” redditor tbmcmahan wrote.

Tagged, the dating app used in the October robberies, did not immediately respond to the Daily Dot’s request for comment.