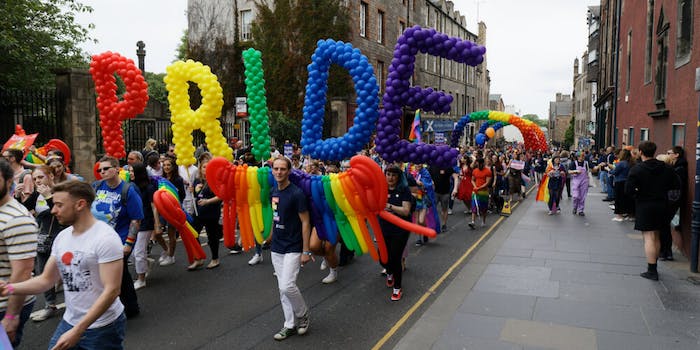 The law applies to men and trans women.

A law that went into effect on Oct. 15 in Scotland will pardon men and transgender women convicted under former anti-LGBTQ laws.

We welcome that today, everyone who was ever convicted in Scotland of a sexual offence between men that is no longer a crime, has been pardoned. The pardon is symbolic – its purpose is "to acknowledge the wrongfulness and discriminatory effect" of the conviction. Anyone with one of these convictions can apply to have it removed from records, so that as far as the law is concerned, it disappears. Details at the link below. As First Minister Nicola Sturgeon said, announcing the pardon in the Scottish Parliament: "For people who were convicted of same-sex sexual activity that is now legal, the wrong has been committed by the state, not by the individuals – the wrong has been done to them. Those individuals therefore deserve an unqualified apology, as well as a pardon." She added: "Therefore, today, as First Minister, I categorically, unequivocally and whole-heartedly apologise for those laws and for the hurt and the harm that they have caused to so many people." More details here: http://www.equality-network.org/pardons-and-disregards/

Homosexuality was only decriminalized in Scotland in 1980, and it wasn’t until 2001 that LGBTQ people achieved full equality under the law in the country. Since then, Scotland has turned things around, and as recently as 2015, it was considered the best country in Europe for LGBTQ rights.

The new law grants a symbolic pardon to people who have been convicted of a former, LGBTQ-related offense—ranging from sodomy to kissing in public—with the option of applying for a disregard, which will wipe the conviction from a person’s record. People who were convicted of these crimes but died have no need for disregard, as criminal records are entirely wiped upon a person’s death. But surviving family members can apply for letters of comfort, which recognize the wrongs done to the deceased and the unjust nature of their convictions.

Media coverage has primarily focused on how the new law will affect gay men. But Tim Hopkins of the Equality Network, which helped the Scottish government draft the legislation, confirmed to the Daily Dot that the law covers trans women, as well.

“The Scottish Government were careful, drafting the pardons legislation, to ensure that it will work for a trans woman who was previously convicted under these laws because she was treated by the law at the time as a man,” Hopkins said. “The pardon would have applied to her yesterday, like anyone else.”

Scotland’s First Minister Nicola Sturgeon said when the bill was introduced last year: “For people who were convicted of same-sex sexual activity that is now legal, the wrong has been committed by the state, not by the individuals—the wrong has been done to them. Those individuals therefore deserve an unqualified apology, as well as a pardon.”

There is no place for homophobia in Scotland.

Today, landmark legislation came into force to pardon all gay and bisexual men who were previously convicted for same-sex sexual activity.

Scots celebrated the government’s decision on social media this week.

TODAY thousands of men in Scotland, convicted of crimes simply because of who they loved, are pardoned. They did nothing wrong.

Nothing will wipe the stain of a thousand years of criminalisation, but today we reconcile the past for all our futures. #LGBT https://t.co/V7tUCR0gAU