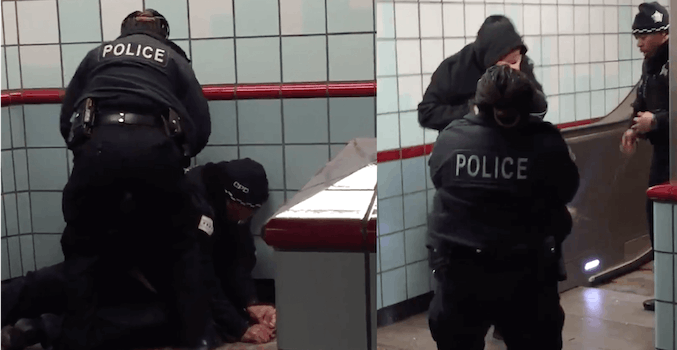 The incident occurred on Friday afternoon at Chicago’s Red Line subway station, according to the Chicago Sun-Times. User @FreeRangeCritic shared the two-part video to Twitter, where it went viral, on Friday night.

“I don’t exactly know what to do with this, but I witnessed and recorded the police-involved shooting at the Grand Red Line station in Chicago a little over an hour ago. This is my unedited video. (Trigger warning, obviously.),” FreeRangeCritic tweeted.

In the footage, both the officers are on top of the man. “I didn’t do nothing,” the man repeats, as the officers try to handcuff him.

They deploy their pepper spray at least once and continue to tell the man to “give me your hands” and “stop resisting.”

After the man gets to his feet, one of the officers tells the other to “shoot him.” The officer then appears to shoot the man. After the shot is fired, the man runs up a nearby escalator, the police follow him, and a second shot is heard off-screen.

The officers were trying to restrain the man because he was “jumping from train (car) to train (car),” according to the Hartford Courant reported.

The officers have been “taken off the streets” following the incident and are under investigation, according to Chicago Sun-Times.

The man is in critical but stable condition, according to the Courant.

Chicago Mayor Lori Lightfoot called the video “extremely disturbing” and said that the officers’ actions are “deeply concerning” in a tweet on Friday night.