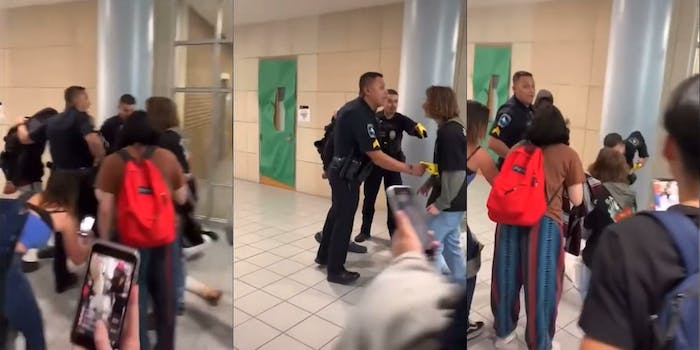 Students were protesting an alleged sexual assault by another student.

A viral TikTok video shows police officers using a stun gun on a child twice at a high school in Little Elm, Texas. The student had already been pepper-sprayed during a protest that devolved into chaos.

Fox 4 reported that the incident occurred on Friday during a protest over a sexual assault allegation involving a student. The district claims that is not true and said “inaccurate information” in a social media post about an incident a month ago spurred the protest.” Police were allegedly called to “calm things down,” according to one report.

One student, TikTok user @kjisgreat, posted a video of himself in action attempting to assist the student who had just been hit with a stun gun. The footage shows the Black student had been stunned before the video started. In the video, police shocked the child again, though he was incapacitated.

“So for reference, the kid was walking out of the school with the kid in handcuffs,” @kjisgreat wrote in the comments for context. “An officer pushed the kid in the white into another officer. The other officer then pepper-sprayed him for no reason. The kid did retaliate [but] what would you do if you got pushed then pepper-sprayed for no reason?”

Twitter user @Imposter_Edits posted an extended version, which shows the tased student unconscious and being dragged by police officers. It also includes a female student appearing to spit on an officer, then getting pushed out of a building.

A Reddit video posted to its popular r/PublicFreakout subreddit detailed a similar point of view. In the comments, the poster stated, “The students called it a “walkout,” but it was really a walk to the house principal’s office as he was responsible for the initial incident. The initial incident was that a girl was sexually assaulted and then placed in ISS (in-school suspension) for three days while the abuser was let off with no punishment.”

WFAA reported on the chaos and noted that “students said complaints about an alleged sexual assault, which some felt administrators were ignoring, triggered the on-campus protest.”

“It was utter chaos. People were banging on the doors. The police were pushing the children around, and it was utter shock, utter shock,” said one parent, Anna De Luna, to WFAA.

She also told WFAA that Little Elm “has had a lot of issues with sexual harassment, sexual assaults. My daughter has personally been sexually assaulted at this school.”

Four kids were arrested for allegedly assaulting police officers. Little Elm Independent School District posted a statement through its Facebook page that appears to place full culpability for the chaos onto the arrested juveniles:

“This morning, students at Little Elm HS had planned a student demonstration inside the campus that caused some students to behave in a way that caused a major disruption. Four juvenile students were arrested for assaulting Little Elm Police officers. Officials from Little Elm ISD and Little Elm Police Department worked together to secure the scene to ensure the safety of everyone at the campus. The demonstration was a result of a social media post the day before that contained inaccurate information regarding an incident that happened a month ago. At this time, everything is calm at the high school, and we are resuming the school day.”

The Daily Dot Has reached out to Little Elm ISD, Little Elm Police, and TikToker @kjisgreat.