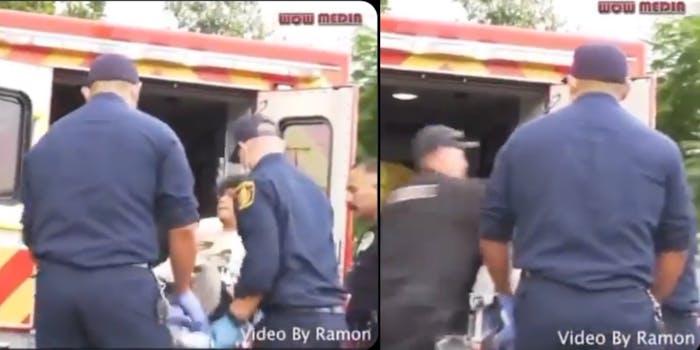 The cop has since been suspended.

A Los Angeles Police Department cop has been suspended after a video showing him punching a suspect who was handcuffed to a gurney went viral this weekend. The incident took place on Saturday in the Mission area of San Fernando Valley following the arrest of two carjacking suspects, according to a police statement issued Sunday.

The video, which has had over 180,000 views on Twitter alone, shows the suspect who was handcuffed to the gurney shouting “bitch” in the officer’s direction and spitting. The cop then rushes toward the man and hits him in the face.

After he punches the suspect, the cop says, “Don’t do that shit again to any officer.” The emergency services workers then push the cop away and continue trying to lift the gurney into the ambulance. Several other officers can be seen standing by, and one seems to try to get the officer to back away and calm down after hitting the man.

According to the statement, the LAPD “learned of the video clip” that was taken by a community member and “immediately initiated a complaint investigation.” The unnamed officer was “assigned home and his peace officer powers suspended pending the results of the investigation.”

“The images in the video are deeply disturbing and while we must wait for the investigation to be completed, the department will act swiftly in any instance of excessive or unnecessary force,” Police Chief Michael Moore said in the statement.

According to the Los Angeles Times, the suspect was put in the ambulance with a spit bag over his head, and it is not known what injuries he was being treated for.

Twitter user @AWKWORDrap posted the video and the caption, “LAPD officer winds up and punches someone on a stretcher being put into an ambulance. Must’ve posed a major threat.” Other users expressed disgust toward the officer’s actions and the lack of action from officers standing by.

“I’d get fired for punching someone in a stretcher, even if they were being mean. Is that just where I work?” tweeted @squalidpumpkin.

“There’s no job where you can walk up from 5+ feet away and punch someone handcuffed to a gurney without getting fired… unless your job is to ‘serve and protect’ the people I guess 🤦🏾‍♂️ 🤦🏾‍♂️ 🤦🏾‍♂️ ,” wrote @ThaBirdmanG.

It is unclear whether the officer was suspended with or without pay.

Some Twitter users are calling for more serious action to address a broader issue within the LAPD.

“AG Merrick Garland @TheJusticeDept needs to investigate the LAPD. There are too many disturbing issues occuring with Officers of the LAPD. This incident of punching a handcuffed person on a gurney is police brutality. #PoliceBrutality#EndPoliceBrutality,” tweeted @thataboy10.

The Daily Dot reached out the LAPD for comment.