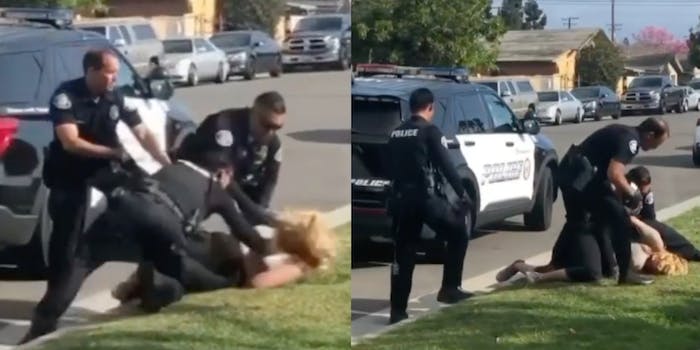 The cop punches the woman in the face twice, causing the two other officers on the scene to shout 'no' and 'stop' before pulling him off her.

Shocking footage out of California shows two police officers restraining a fellow cop after he began punching a handcuffed woman in the face.

The incident unfolded on Wednesday after police in the city of Westminster responded to a report of an assault with battery. A 911 caller, according to Fox 11 Los Angeles, alleged that a Hispanic woman assaulted an Asian woman after she attempted to rescue a dog that ran out into the street.

According to Fox 11, 34-year-old Ciomara Garcia was eventually detained by police after it was learned that she allegedly had an outstanding felony warrant for vandalism. Police reportedly said Garcia, who they accused of potentially being under the influence, became combative shortly after.

The video, captured by a bystander, shows the handcuffed woman being picked up from the curb before allegedly kicking one of the three officers.

The officer immediately responds by punching Garcia in the face twice, causing the two other officers on the scene to shout “no” and “stop” before pulling the cop off of the woman.

Garcia was reportedly taken to the hospital for examination and was later booked into the Orange County Jail on her outstanding warrant.

The Orange County District Attorney’s office is also reportedly looking into the officer’s actions to determine whether criminal charges are needed or if the use of force was justified.

The incident is being met online with condemnation for the cop who punched the woman and applause for the two officers who intervened.