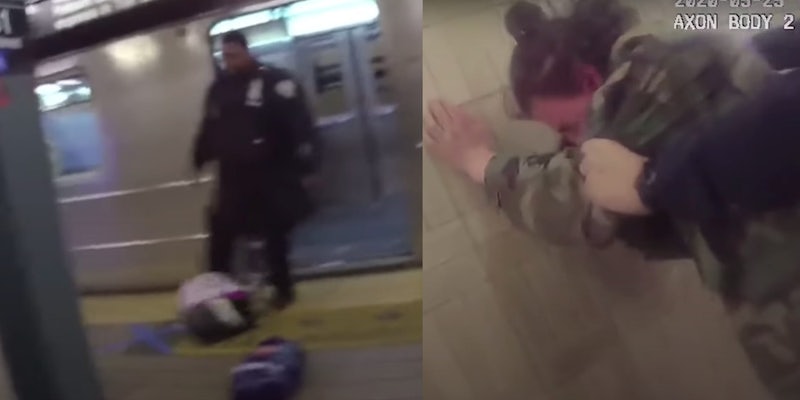 The incident occurred on a subway in May and was reportedly started because the man was taking up more than one seat.

Bodycam footage shared by news site the City shows an officer asking the man, who has since been identified as Joseph T., to “step off the train.”

“You’re holding the train for everybody,” the officer says. “Step off, or I have to drag you off.”

“How am I holding it up when I’m sitting here, and I’m going to Brooklyn?” the man retorts.

The officer, who has since been identified by the City as Adonis Long, then touches Joseph’s arm, seemingly in an attempt to get him to leave.

Long then attempts to pick Joseph up.

“Don’t touch me! Get off me!” Joseph says again, swatting Long’s hand away again.

Long then starts repeatedly punching Joseph and attempts to drag him off the subway. Joseph holds onto a nearby subway pole.

“Get off the fucking train,” someone says, as Joseph tries to sit back down.

The footage becomes blurry given the commotion.

Police then chunk Joseph out of the subway, onto the platform floor.

The footage becomes momentarily blocked, and then Joseph is seen being put against the wall by an officer.

One of the officers says, “Sit down!”

Officers strew Joseph’s belongings on the platform floor, with one officer kicking a bag of his.

“Sit down on the floor!” says an officer.

One officer is seen pepper-spraying Joseph’s face as he turns away toward the wall and cries, “Stop!”

Joseph is then seen trying to get away before falling on his knees and asking them to “Stop!”

Officers then seemingly try to detain him. An officer holds Joseph by the neck and pushes him to the ground.

“Listen I’m gonna take you to the ground,” one officer says.

The officer grabs Joseph by his hair as he groans. Another places at least one hand on Joseph’s neck, seemingly choking him for a few seconds.

“I’m having a panic attack, sir, please,” Joseph pleads with them later on in the video. “It hurts please.”

Officers are then seen holding Joseph down while he lays on the floor.

Toward the end of video, Joseph is seen being carried away in what appears to be a medical gurney.

The Manhattan District Attorney is reportedly charging Joseph with a felony assault. He is facing charges for “kicking” an officer’s hand during the arrest, according to the City.

In a recent interview with the City, Joseph said he felt his “heart was going to fall out.”

“I feel like somebody else did something that looks like me, and I’m getting the repercussions from it,” he said.

In May, during an arraignment, prosecutors blamed Joseph for responding to the police “with violence.”

The Legal Aid Society, which is helping Joseph, said the police violence against Joseph is “both unconscionable and completely indefensible” and is calling for the officers involved to be fired.

“It’s equally shocking that the Manhattan District Attorney’s Office, despite seeing this video, chose to bump up the charges against our client. We are calling on them to dismiss these charges immediately in the interest of justice,” the Legal Aid Society told the City.