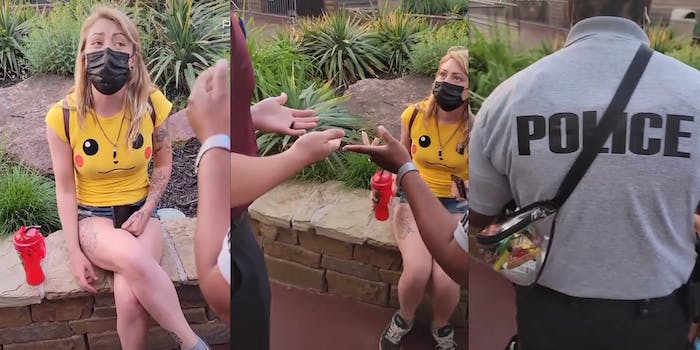 Her daughter is crying in the video.

A mother who says she was body-shamed and harassed by police at an amusement park is trying to raise awareness of the incident after sharing the video to TikTok.

Bailey Breedlove was spending the evening with her family at Frontier City, a Six Flags amusement park in Oklahoma City, when she says her 11-year-old daughter was stopped for rolling down a hill on her Heelys.

“Then [the officer] proceeded to follow me and grabbed my arm to turn me around and proceeded to tell me my shorts were ‘too short,’” she wrote on Facebook, noting that they had already been in the park for several hours without any issues by that point.

Breedlove alleges that the officer called for backup, and that she was eventually told she would have to buy other shorts from the park in order to stay—but that when she agreed, she was “threatened with criminal trespassing.”

Breedlove says that though the family opted to simply leave the park at that point, the officer instead stopped them and demanded Breedlove show identification, at which point the recording begins.

The video opens with Breedlove sitting next to her crying daughter as the officer and another person continue to demand ID, so they can issue a criminal trespassing citation.

Viewers generally took Breedlove’s side, insisting that the whole thing sounds ridiculous. “Sorry I didn’t realize I was in high school again??” one user wrote.

Another pointed out that “people walk around in their swimming suits” in the water rides portion of the park.

Ever since the incident, Breedlove says she’s been trying to reach out to corporate to get clarification on why this happened and receive a refund for the tickets. “I have emailed and called Frontier City with no reply, and I’m pretty sure now I am blocked,” she says in a followup video.

Although the amusement park’s policy, per its website, does specify that it is allowed to deny entrance to “anyone who refuses to comply with the dress code,” there isn’t anything regulating the length of shorts. Instead, the policy focuses on banning clothing with “profanity, obscene gestures, obscene statements” and mentions a vague ban on “clothing generally considered offensive.”

“Your policies are vague and confusing and the way you body shame and discriminate is unlawful,” Breedlove wrote in an email to corporate that she shared online. “I have a 5 year ban now but will not be returning to any of your parks if this is how you treat women and law abiding citizens and visitors.”

The Daily Dot has reached out to Six Flags.