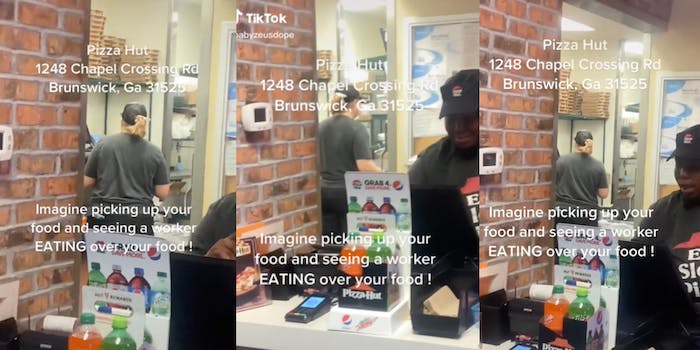 Some are calling the filmer a 'Karen.'

A Pizza Hut employee was called out on TikTok for supposedly eating over a customer’s pizza. Instead of causing a backlash, most people came to the employee’s defense.

“Imagine picking up your food and seeing a worker EATING over your food,” the text on the video, filmed by TikToker @babyzeusdope, reads. The entire street address of the Georgia-based Pizza Hut is also overlayed on the TikTok.

In the video, the woman, whose back is turned to the camera, is seen chewing and quickly putting something in her mouth in the Pizza Hut kitchen. What she’s eating is unclear.

When the employee walks away, it doesn’t seem like she was standing over any customer’s food. The only thing on the table seems to be a dusting of flour or cornmeal, which is often used when rolling out dough so it doesn’t stick to the table.

“She’s not even leaning over food,” Ashley Gustavson pointed out in the comments, along with several other people.

The video raked in more than 100,000 views and was accompanied by the caption, “This is disgusting.”

Out of hundreds of comments, the majority chose to explain why the worker might be doing that and speak to the reality of working in the food service industry.

“They prolly are short staffed and she didn’t get a break and is having to eat while working so Karen’s like you can get your food. Smh,” @iamtheone100 wrote.

User @pzambrano1209 echoed the sentiment, “All fast-food employees do this, some of them don’t get [breaks] so they have to scarf something real quick, I do agree she should eat in the back tho.”

“Leave her alone these ppl are overworked as it is,” @bbiabla commented.

An alleged former Pizza Hut employee even chimed in.

“As a [former] employee for Pizza Hut we don’t have break rooms but never ate near the oven and I don’t [see] the oven or food there,” @crazygal023 said in the comments.

Several others made similar claims to @crazygal023, saying the fast-food restaurant they worked at didn’t have an employee break room, and they also had to eat on the floor when they got hungry.

The Daily Dot reached out to @babyzeusdope via TikTok comment.