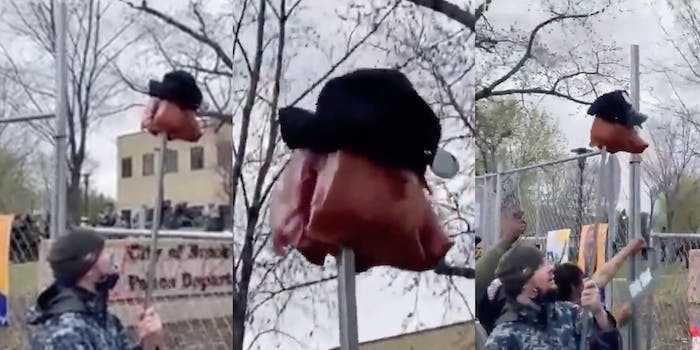 A man paraded through Brooklyn Center with a severed pig’s head on a pike during protests over Daunte Wright’s recent death at the hands of police.

The unidentified man was attending protests outside the Brooklyn Center, Minnesota police station Wednesday evening when he was spotted with his swine head. He does not appear to be among the 24 protesters who were arrested for rioting and curfew violations. Video footage of the man’s bold prop shot to the top of Reddit’s r/PublicFreakout overnight, earning hundreds of upvotes in a matter of hours.

In the video, the man can be seen mingling among other protesters separated from police by a metal fence. He holds the pig head, which sports a police cap, directly in front of an armored police vehicle. In the footage, the man can vaguely be heard shouting questions like “what the fuck is a Sheriff doing in an armored car” at police.

The protesters surrounding the man and his statement piece can be seen pumping him up and egging him on. As the video concludes, the people filming can be heard discussing whether the head atop the pike is, in fact, a genuine pig head. It does appear to be real.

On Reddit, conversation in the comments sought to clarify where, exactly, one might track down a genuine pig’s head for a protest. Most people agreed that a butcher, or anyone who frequents a butcher shop, might have easy access to swine heads.

There were plenty of jokes to accompany the discussion. The post is riddled with Lord of the Flies quips and references to Animal Farm. People also pointed out the historical parallels with comments like “French revolution be like,” while everyone else debated the struggle of acquiring a pig’s head in a city.

The man told Fox News he is a Navy veteran. He told the publication that his actions, along with those of his fellow protesters, were spurred by necessity. He claimed Kim Potter, the police officer who killed Daunte Wright “essentially works for an occupying force.”

Wright’s killing “is not manslaughter. It is an act of war,” according to the man’s statements.

Potter was arrested Wednesday, following Wright’s death on Sunday. She is due for her first appearance in court on Thursday, according to the New York Post.