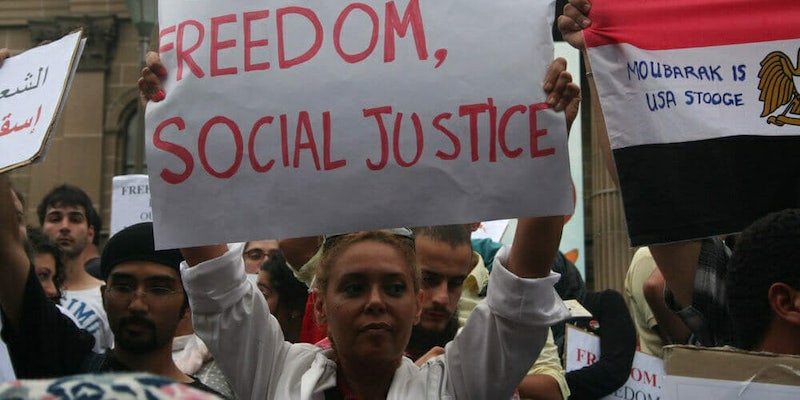 These activists didn't stand down in the face of authority.

The phrase “pick [or choose] your fighter” is a reference to old-school video games that became a popular meme. The meme simply involves prompting others to choose from related images, like food or celebrities.

Hiba’s “pick your fighter” tweet has collected more than 100,000 likes and nearly 500 replies, many of them containing images of women revolting in various places all over the world. Here are the stories behind some of the images in the thread.

The first image in Hiba’s tweet is from a 2007 collection by Anthony Karen, a photojournalist who spent a decade documenting the Ku Klux Klan. The image of a Black woman confronting a masked KKK member was captured at a rally in Tupelo, Mississippi. According to Karen, the rally hosted by the KKK was “against illegal immigration and local sex offenders, and supported putting prayers back in school.”

A black and white image posted in the thread is of a Swedish woman swinging her purse at a neo-Nazi in 1985. According to Women in the World, the woman is Danuta Danielsson, a then 38-year-old Polish woman whose mother had been sent to a concentration camp during World War II. The moment was captured by Swedish photographer Hans Runesson during a demonstration of the Nordic Reich Party supporters. The photograph regained popularity two years ago in a heightened political atmosphere. The photo in the preceding tweet is also of a neo-Nazi rally in Sweden, this time featuring Tess Asplund protesting the Nordic Resistance Movement in 2016.

This image of a defiant Chilean protester was taken by Reuters photographer Carlos Vera Mancilla on the anniversary of the 1973 Chilean coup, which caused the country to fall under a harsh dictatorship. While the young girl in the photo has not been officially identified, the protest she engaged is in response to the Chilean government not taking responsibility for the lives lost in the coup. The image went viral globally and has become a symbol of the annual commemoration ceremony honoring the people who died during the 1970s violence.

The image of a Black woman protecting a young Black man from a Dominican police officer isn’t actually from a moment in history. The photo is from a 2013 film, Cristo Rey. The still has circulated on the internet for years with a false narrative in which a Haitian mother is protecting her son from the police. While the fierce image evokes a powerful message about activism, race, and gender, it is purely fictional.

The image of a woman holding a flower and talking to soldiers with bayonets was taken by world-recognized photographer Marc Riboud. The photograph features a then 17-year-old Jan Rose Kasmir protesting the Vietnam War in 1967. The photo, dubbed “The Ultimate Confrontation,” has earned global recognition and is one of the photos used to represent the anti-Vietnam War movement. Kasmir, now 68 years old, is still an active social justice advocate and participates in protests.

2, and I’ll submit this for consideration pic.twitter.com/fzrrev8GF5

This more contemporary image of a woman being approached by police in riot gear features a young nurse named Ieshia Evans. Evans participated in a Black Lives Matter protest in Baton Rouge following the death of Alton Sterling, a Black man who was shot dead by police officers in 2016. The image has become a modern symbol of peaceful protest and strength. Evans, who stood unarmed in a sundress, was apprehended and arrested for the first time due to her participation in the protest. Evans later recalled to CBS that she “had no fear in [her] body” as she faced the police.

The original thread by Hiba has amassed dozens more photos and stories of revolutionary women. Hiba did not immediately respond to the Daily Dot’s request for comment.