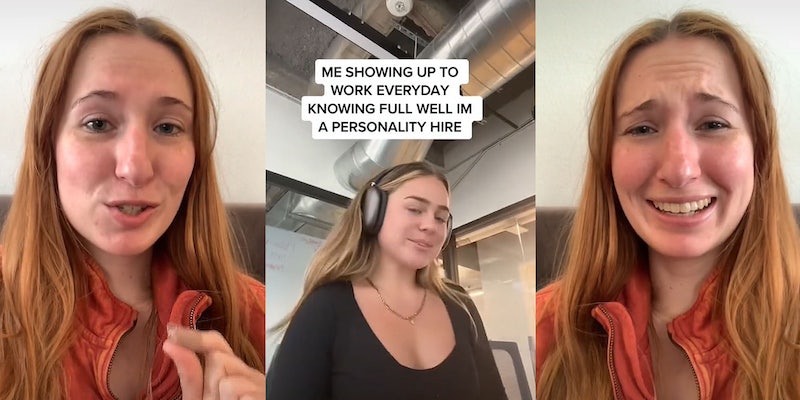 Worker says she was a ‘personality hire’ in viral video, sparking debate

'My boss straight up told me that they hired me because of my personality.'

A TikToker is calling attention to the idea of a “personality hire,” and causing some debate in the process.

In a competitive job market, people do whatever they can to get hired at decent jobs with decent pay. Sometimes, that means just being a person others want to work with, even if you aren’t quite as qualified as others going out for the same role.

After @saucemediagroup shared a TikTok from an employee referring to herself as a “personality hire,” Em (@n0tsvetlana) did a stitch with that video sharing her own experiences.

“I’m not lying, on my last job, my boss straight up told me that they hired me because of my personality,” she says. “And I was like, ‘Oh, no, yeah, I did that on purpose. … I was like, I know that I was not qualified for this position, so I was like, ‘How do I make them like me so that they want to keep me around?’ And I did it. And I got the job.”

@n0tsvetlana #stitch with @saucemediagroup I can always be the most charismatic person in a room and I will DIE on that hill ✝️ #jobtips #askmeanything #vibes #storytime #fyp ♬ original sound – Em :)

The video sparked some debate over whether or not that’s a smart move for bosses hiring candidates, and how much white privilege may factor into that.

“So favoritism,” @mandi_etorki added. “I can do the job well and be nice as possible but if I’m not ‘fun’ then I’m not gonna get rewards.”

@jstuhair had a different perspective, pointing out, “You can teach people skills, you can’t teach people how to be enjoyable to work with.”

Em, who has over 40,000 followers, followed up in the comments section by saying she isn’t denying that she has white privilege factored in when applying for jobs but was just trying to point out that being someone who seems like a joy to be around 40+ hours a week can tip the scales in your favor.

The TikToker also offered a handful of tips for people interested in upping their interview game to try to make them more appealing to hiring managers, in both a follow-up video and its comments.

The Daily Dot reached out to Em via email.