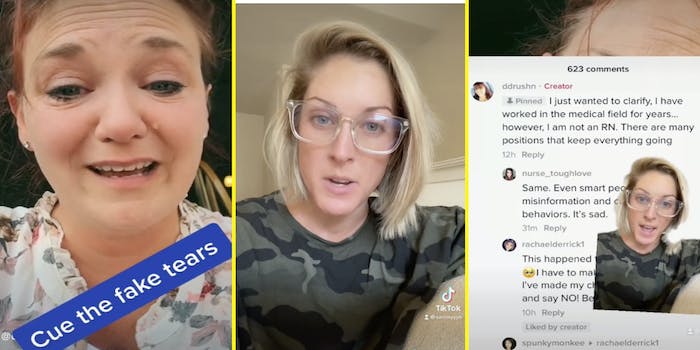 A healthcare worker took to TikTok to cry about how her hospital’s vaccination requirement will “shut down” a child cancer treatment facility allegedly serving an entire state. In a reposted version of that video that’s since gone viral, a nurse questioned that argument’s validity, getting the backing of a number of commenters.

TikToker @sammyyyh, who identifies on the platform as a “nurse” and “ally,” has seen her video go viral in the nearly two weeks since she first posted it.

The video starts out with a clip from TikTok user @ddrushn, whose account has since gone private.

“If they force us to leave or fire us,” the clip begins, “It’s not me that I’m worried about. I can find a job, but I’ve been in this department for five years. And this is going to affect a lot of families. We’re the pediatric oncology department for the whole state. And it will shut down.”

The TikToker reposting the video then cuts in, and she is clearly not having it. “So let me get this straight,” she starts in. “You work in pediatric oncology, arguably one of the most vulnerable populations to COVID, and you don’t understand the significance of getting a vaccine? Or why your employer is mandating the vaccine?”

“And you feel that there are enough people at your pediatric oncology clinic practice that feel the same way that you do,” she continued, “that your clinic will shut down over a vaccine mandate.”

She then shared a screen grab from the healthcare worker’s original TikTok, in which the worker said she wasn’t a nurse, rather an undisclosed team member at the facility.

“Now I know you’re not a nurse,” the TikToker said while sharing the admission, “so I guess I’m wondering what qualifications you have that are lending you to speak on this and to feel that you know more than the experts about the safety and efficacy of the vaccine.”

She then pointed to a conspiratorial claim in the comments, from the original video’s creator, that screamed “talking point” to her.

“If what you’re saying is true about your clinic,” the TikToking nurse concluded, “it sounds like your patients actually may be better off if your clinic shuts down, considering they don’t believe in evidence-based practice.”

Someone exclaimed in all caps, “She is working with kids and cancer and refuses vaccinations?!?” before adding, “There’s a special place in Hades for her.

“Those of us who actually work in pediatrics,” began another commenter, “know that the patient is first and always, and covid is very dangerous to them and we need to protect them.”

Regardless of what position she holds—a screengrab of one of her comments revealed, “There are many positions that keep everything going”—many felt that she needed to find another place to work.

“I’m a nurse of 21 years,” one commenter said with a very “I’m so tired” tone. “I don’t understand people in the health care field who don’t believe in science.”