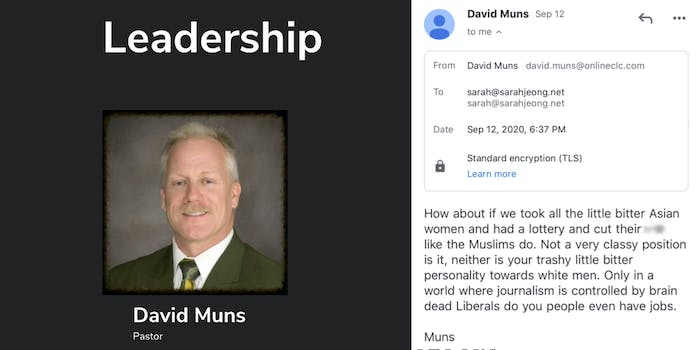 A racist email from Michigan pastor David Muns was exposed online by Korean-American journalist Sarah Jeong on Tuesday. On Wednesday, Muns told the Daily Dot that he’s apologized to her.

The racist email appears to be in response to a meme with a quote incorrectly attributed to Jeong. The meme was debunked by Snopes in 2018. Snopes, a fact-checking website, flagged attribution of the quote to Jeong as “false.” The post was fabricated in an effort to get Jeong fired from her position at the New York Times. The fake quote attributed to Jeong says that there should be a “castration lottery” for white men.

Jeong posted the email from Muns, along with the church Muns is affiliated with—Christian Life Church—to her Twitter page. “I pretty much never do this but this guy is a ‘pastor,'” she wrote alongside a screenshot of the email. “You would be surprised at how many people send me these kinds of messages from their work emails. But using the domain for your online church is a new low, and yes, I am going post your email on the internet.”

“How about if we took all the little bitter Asian woman and had a lottery and cut their clits off like the Muslims do,” Muns wrote in the Sept. 12 email. “Not a very classy position is it, neither is your trashy little bitter personality towards white men. Only in a world where journalism is controlled by brain dead Liberals do you people even have jobs.”

In an interview with Click On Detroit, Muns admitted that his “response” to Jeong was “terrible.” In a text to the Daily Dot, he added: “Pastor Muns here. I issued a very sincere apology and hopefully she will receive it.”

He intends to address the incident with his congregation this Sunday, indicating that Christian Life Church is not currently distancing itself from Muns.

In a phone interview with the Daily Dot, Muns said that his email was not an “evil” attempt to “beat up Ms. Jeong.”

“I was simply asking the young lady, ‘How would you feel if this were said about you,?'” he said. “To call out white men like that… We don’t need any more fuel on the race issues in the U.S.”

Muns repeatedly noted that he pastors a “biracial congregation” and that the race issues plaguing the U.S. have made his job “stressful” and like “a ballet dance to keep everyone walking in the right direction.”

Muns also said he apologized to Jeong upon learning that the quote attributed to her is false. He did note, however, that a “reliable source” told him the quote was real. He stressed that he was aware of many “bitter” tweets from Jeong’s past. He pointed to a New York Times article, in which the publication defended Jeong’s past tweets, as proof that she should be “held accountable.”

He also defended the language he used in the email as reciprocatory. “I’m not a racist,” he said. “I used the word Asian because she used the word white.”

Muns has been the pastor at Christian Life Church in Macomb, Michigan, for at least five years. He shares the pastorship with his wife, Nicole Muns.

We’ve reached out to Jeong.