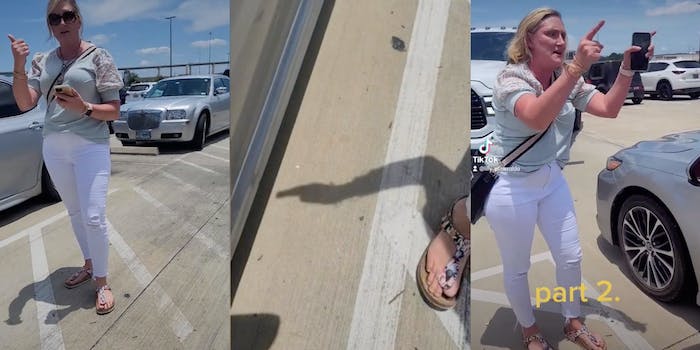 The woman even takes a swing at one of the family members.

A white woman was caught telling a Hispanic family to “go back to your brown country” following a mild parking lot altercation.

The majority of the incident was captured on camera and posted to TikTok user @lilly_esmeralda’s page. A series of TikTok videos, followed by several storytimes from Esmeralda and her partner, unravel the events of the day.

The two most viral videos on Esmeralda’s page see the incident unfold in a New Caney, Texas, parking lot. Part one of the viral encounter has racked up more than 3 million views, despite being removed multiple times for supposedly violating community guidelines on “hate speech” and “violent and graphic content.”

Video footage of the altercation begins as Esmeralda is approaching the woman, who is in the midst of phoning the police. When asked about what prompted the argument, the woman informs Esmeralda that “your husband kicked my shit in, I didn’t damage y’all’s car.”

She and Esmeralda’s partner, who is seated in the driver’s seat of a small silver vehicle, exchange several insults as Esmeralda seeks answers to what prompted the argument. After calling Esmeralda’s partner a “pussy,” the woman suddenly escalates things, taking a swing at Esmeralda. Her hand can clearly be seen in the shadow on the ground as she swings an open hand at Esmeralda’s face.

Part two sees the argument continue, as the woman gives a fragmented account of the issue. She notes that her large white truck has cameras, expresses frustration over Esmeralda’s partner’s choice to call her over, and accuses Esmeralda of “swinging” at her. When Esmeralda’s partner reminds the woman that she took the first swing, her remarks turn racist.

“No, y’all go back to your brown country, bitches” she says, stepping away and gesturing broadly at the family. When they call her out for being racist, Karen screeches that she’s “married to a Black man.” But then, she buckles down, calling them “brown” yet again.

Esmeralda gave a more thorough account of the altercation in a series of storytimes. In the first, her partner claims that the woman was reversing out of a parking space in her large vehicle and nearly struck his car. He says he honked to inform her that he was there, and when she nearly hit him again, he resumed honking to ensure that an accident didn’t happen. This seemingly set the woman off, as she exited her vehicle to begin banging on his window.

A short argument allegedly resulted in the woman kicking the family’s vehicle, which Esmeralda’s partner reciprocated on her truck. His kick apparently had more force, however, as he admits in the storytime that “I put a dent in it.”

The following moments were captured in part one of the viral series, as the woman gets upset and takes a swing at Esmeralda. Esmeralda says the woman immediately backed away. When Esmeralda went to engage further, a large group of people intervened and put themselves between the dueling women.

Esmeralda has yet to give an update on what occurred after police arrived, but they can be seen conversing with the woman at the conclusion of the part one video. Commenters requested more information, and many expressed outrage over the woman’s antics.

In response to commenters, Esmeralda claimed that she pressed charges against the woman. She noted that the woman was not escorted to jail, but “charges were pressed” and the involved parties have “court this month.”

Given the interest her videos have garnered, chances seem good that Esmeralda will provide an update following her court appearance.

The Daily Dot has reached out to Esmeralda and the New Caney Police Department.