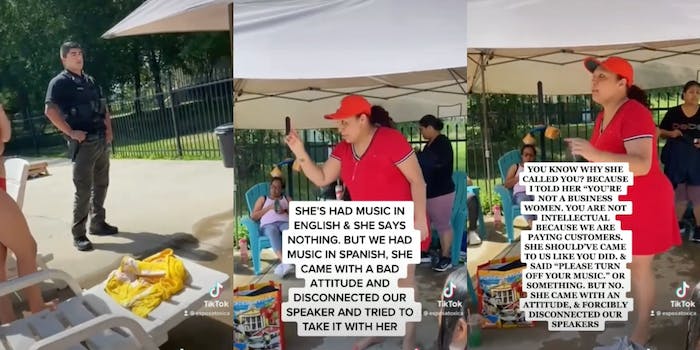 ‘It hurts me to see the inequality and racism’: TikTok captures family being kicked out of pool for playing Spanish music

'She came with an attitude and forcibly disconnected our speakers.'

A viral TikTok shows an alleged case of racial discrimination as a Mexican family was kicked out of a pool at Flex Fitness and Recreation Center in Hendersonville, North Carolina for playing Spanish music.

The video, which has 6.8 million views, was posted by Bianca Figueroa, or @esposatoxica, and showed the family sitting with a cop standing nearby. The officer and a woman in red begin exchanging words in Spanish.

In translation, shown in the overlay, she told the officer, “It hurts me to see the inequality and racism. I will explain to you what happened, and we will leave because I understand your job; you’re an employee.”

“She’s had music in English, and she says nothing,” she said, possibly referring to other patrons of the pool. “But we had Spanish music, and she came with a bad attitude and disconnected our speaker and tried to take it with her.”

She told him one of the white women at the pool had complained about the music.

Then she explained, “You know why she called you? Because I told [the owner] ‘you’re not a businesswoman. You’re not intellectual because we are paying customers.’ She should’ve come to us like you did, and said ‘please turn off your music.’ But no, she came with an attitude and forcibly disconnected our speakers.”

She said they would take her to court, but told the officer they were “leaving for you. Because I respect you, not for her.”

Figueroa added commentary to the clip, claiming that the white women who initially complained began telling people that the family was being “belligerently drunk” and “cussing everyone out” at the pool.

“Now do we see belligerently drunk women?” she asks. “Do we see anyone being arrested for public intoxication? No we don’t. On the contrary, we see very respectful Mexican women defending themselves for a service they paid for.”

Figueroa says that one of the family members is a renter in the building neighboring the pool. Because she lives next to the pool, she was under the impression that the establishment allowed music because she “hears it all the time,” Figueroa says. Now, she’s apparently being evicted from that building, with no explanation provided in the video.

Viewers of the video supported the family by review-bombing Flex Fitness and Recreation Center with one-star reviews on Yelp and Google, with humorous “I got kicked out” explanations.

“I got kicked out because I opened a bag of nacho cheese Doritos and was told the only acceptable flavor was cool ranch,” said one comment.

Another said: “I was wearing a Virgen de Guadalupe necklace, and they threw bleach on me while saying 10 Hail Marys. DO NOT RECOMMEND!”

An outrageous review came from Carla M.: “If you do the Macarena 3 times, Ultimate Karen will emerge from the pool with her flaming manager haircut. She will rant about how this is America, and you are making her feel uncomfortable. Filming her for evidence will start weakening her. Finish her off with a bottle of Tapatio hot sauce.”

Figueroa says she’s unsure how to help the family further than bringing the business’ reviews down.

“Social media did what it needed to do and brought their Google Reviews down,” she said. “They ended up taking their Facebook page off of Facebook. But at this point, I don’t know what I can do.”

The Daily Dot has reached out to Figueroa and Flex Fitness for comment.