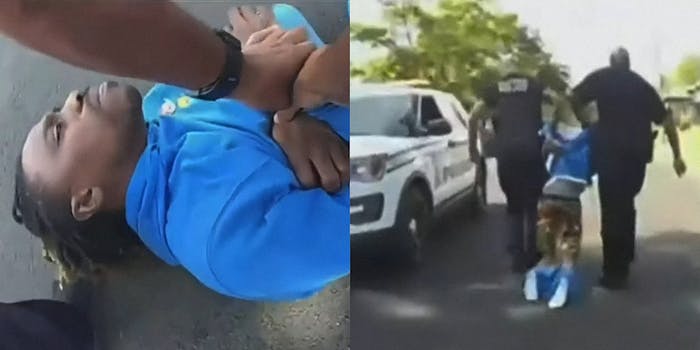 ‘You could hurt me’: Video shows police officers pulling paraplegic man out of his car by his hair

A disturbing video shows police in Ohio dragging a paraplegic man out of his car by his hair during a traffic stop.

The video detailed yet another alleged instance of police malfeasance and called into question the treatment of disabled people in police interactions. According to Dayton Daily News, the incident transpired in Dayton, on the 1200 block of West Grand Avenue. Video footage shows it occurred during the early afternoon on Sept. 30.

According to WHIO, Clifford Owensby said, who cannot walk, “said he was out running errands without a wheelchair in the car.” He says he “usually get assistance with getting in and out of the vehicle,” but the wheelchair was not in the car.

Owensby said to WHIO that he was pulled over because the tint of his windows was too dark. He says he provided his information to the officer, but the officer asked him to get out of the car.

“The officer noted a dog would need to search the vehicle due to Owensby’s ‘history,'” said the WHIO report. The station discovered Owensby had previous drug and weapons convictions in Montgomery County Common Pleas Court.

“I’m paraplegic,” he said several times, in response to the demands he get out of the car.

Officers offered to help him out of the car numerous times, but he did not want the police to handle him.

He requested a supervisor and even attempted to call someone to assist him.

“You see your two options here?”

Officers dragged Owensby by his sweatshirt and hair out of the Audi sedan and onto the pavement a few seconds later. Footage shows Owensby’s legs dangling, with him yelling in pain.

Owensby was eventually pulled into a police cruiser.

After the video was posted to the internet, interim Dayton police chief Matt Carper said in a statement that the department’s Professional Standards Bureau is currently investigating the incident, including “the officers’ actions and any allegations of misconduct.”

According to Dayton Daily News, Dayton City Manager Shelley Dickstein also issued a statement: “As in any situation where a city employee’s actions are in question, we commit to completing a thorough review to ensure that we are held accountable to the public,” she said. “It is our goal to not only maintain high standards and expectations now but continuously improve to meet and exceed the future expectations.”

“I’m hoping for some kind of disciplinary action, and furthermore, I wish that this doesn’t happen to no one else,” Owensby said to the Daily News. “This is unacceptable. We’re supposed to have officers out here to serve and protect, and when we lose faith in them doing that, who do we turn to?”

The Daily Dot has reached out to Dayton Police for further comment.