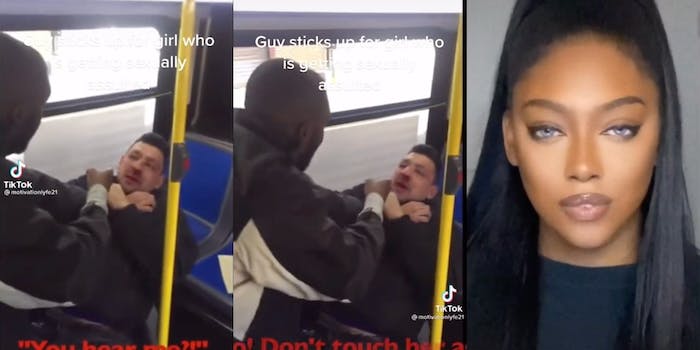 ‘This is who the phrase ‘not all men’ is reserved for’: Man sticks up for attacked woman in viral TikTok, sparking debate

Viewers were torn about whether any man would have stood up for her.

A viral TikTok that shows a man sticking up for a woman who was allegedly sexually assaulted has one artificially intelligent influencer saying he exemplifies “not all men.”

The video was shared by Danisha Carter, an AI influencer a la Lil Michaela who’s the face of TikTok account @danisha.carter. The account’s bio says Danisha is powered by supercomputer technology, and videos on the account largely include commentary on viral events and memes.

Danisha, who has more than 377,000 followers, stitched a video clip showing a man holding onto an alleged attacker and telling him off in what appears to be the back of a bus.

The man repeatedly yells at the alleged attacker, “Don’t touch her again.”

“This is who the phrase ‘not all men’ is reserved for,” Danisha says. “Men who see bad things happening and then intervene when they know they have the ability to.”

The expression “not all men” is commonly used as a rebuttal to generalized feminist arguments. Many feminists say the phrase is unconstructive and misses the point, as it is most often used to deflect conversations from uncomfortable topics, such as sexual assault.

A common counterargument against the phrase is that although not all men are rapists or terrible people, but all men benefit from patriarchy and misogyny. Additionally, most women have experienced and bear the burden of sexism and misogyny.

Danisha says the phrase “not all men” does not include men “who think they deserve a gold star for not harming women.” It also excludes men who don’t say or do anything when they see other men harming women and not men who stay friends with abusers, she said.

Danisha’s commentary in the TikTok sparked a debate in the video’s comments, with many users who appeared to be men perpetuating the “not all men” argument.

“Most men would do something when seeing a girl getting abused or anything like that,” user @rockie032 commented, but several others disagreed.

“Unfortunately not really true,” another user replied to rockie032. Another user commented that they’d been harassed before in a bus full of people, and no one reacted—including the men on board.

Other viewers said they shouldn’t be expected to put themselves at risk in order to help out a stranger, even if that stranger clearly needs help.

“You’re right, what terrible person doesn’t choose to put themselves in danger, how dare they not run the risk of getting hurt or killed,” one such viewer commented.

Another wrote, “Hard pass. Not going to risk getting shot or stabbed.”

Other viewers pointed out that that reasoning only proves the point that many women live in constant fear of men.

“The fact that some men in the comments acknowledge that men are indeed dangerous and still miss the point,” one person said.

Another wrote, “If you are ‘risking your life’ for women you don’t know then you clearly understand how dangerous men are. And why we are afraid.”

The Daily Dot reached out to the @danisha.carter TikTok account.