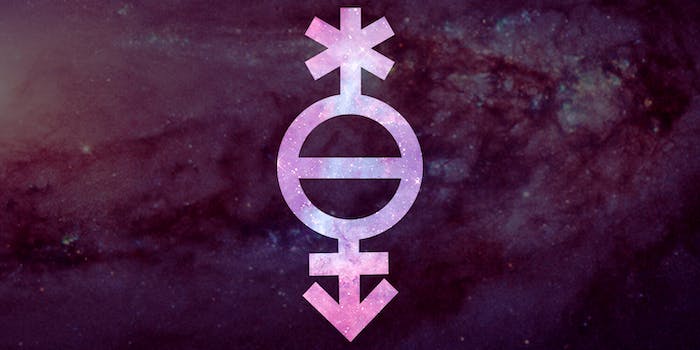 What it means to be pangender

'Imagine you want cake, but you also want ice cream at the same time.'

In 2019, people are more open and inclusive when it comes to conversations about gender and sexuality than ever before. While the topic can still be divisive, we live in a world where people are acknowledging that gender is a spectrum full of different identities. But just because people are more open about their gender identity doesn’t mean that it’s always easy to understand. There are gender identities that may be more familiar—like nonbinary, cisgender, and transgender—and then there are ones, like pangender, that you may be a little less familiar with. So let’s take a small step and break one down. Here’s everything we know about pangender identity.

According to Dictionary.com, pangender is defined as “a nonbinary gender identity for a person whose gender encompasses the entirety of the gender spectrum.”

To better understand what pangender means, we should first zoom out to a brief refresher on what gender means in the first place. Let’s break it down like this: When most people are born, they are assigned to either male or female gender, primarily based on their sex characteristics. This classification of breaking down gender strictly into either male or female is what’s known as the gender binary. Someone whose gender defies this classification, i.e., people who don’t just conform to one of those genders, may identify as nonbinary.

Within the overarching umbrella of nonbinary, there are many identities, including agender, androgyne, bigender, gender fluid, gender-neutral, gender flux, two-spirit, and a whole host of others, each deserving of their own explainers.

Essentially, pangender people identify as all genders. They are the gender opposite of agender, or people who don’t identify with gender at all.

Ash Brehmeyer, one of the moderators for the Pangender Reddit community r/pangender, described the feeling of being pangender like this: “Imagine you want cake, but you also want ice cream at the same time, in this example, cake means being a woman and ice cream means being a man,” Brehmeyer said. “My brain is structured in a way where I feel the need to have both, not want but more of a need.”

Brehmeyer said they realized their pangender identity just two months ago when they were experiencing gender dysphoria and turned to Reddit for help.

“After a few hours, I got a decent amount of feedback, most of which talking about something called ‘pangender,’ so I Googled it and got myself equated,” Brehmeyer said. “I immediately knew after looking at some YouTube videos on the explanation and random articles that this was me, everything clicked.”

Importantly, there’s not a pronoun that pangender people universally use, and it’s important to ask individuals what pronoun(s) they use. While a pangender person may choose to use pronouns such as she/her and he/him, or combination of both, there are many pronouns under the overarching umbrella of nonbinary gender identities that pangender people may use.

For example, pangender people may use the following gender pronouns: they/them/theirs; zie/hir/hirs; or ey/em/eirs. The LGBTQ+ Resource Center at the University of Wisconsin Milwaukee has a breakdown of other gender neutral and inclusive pronouns, such as sie, ve, and tey. Pangender people may also use various pronouns depending on how they identify.

What’s the difference between pansexual and pangender?

To answer this question, you have to remember that sexuality and gender are two completely different things. To put it simply: Sexuality is who you’re attracted to, and gender is who you identify as.

The term “pangender” is still a relatively new one, and entries for the word only started appearing on Gender Wiki back in 2015. Because of this, the pangender community is still rather small.

According to Brehmeyer, this has led to what they feel to be a lack of representation in the LGBTQ community.

“I have struggled a little due to the lack of knowledge in my bigger community,” Brehmeyer said. “I have seen pretty minimal representation in my community as I think many are still trying to get used to transgender as a concept let alone the minorities in the minority.”

This lack of representation led to Brehemeyer seeking out the pangender Reddit community to see if they could help grow the community’s online presence, as well as to help others who are confused about their identity.

“It’s OK to not be sure about who you are and that it’s OK to have to take some time to figure that out,” Brehmeyer said. “Life isn’t simple and it becomes more and more complicated the more you find out, so if you find out you are, welcome to the club.”

For anyone questioning their gender identity, Reddit can be a great place to start. It’s full of people willing to give advice and specific sub-communities for those who identify as LGBTQ.

Organizations like the National Center for Transgender Equality, Pride.com, and GLAAD can also be helpful in providing community and resources.