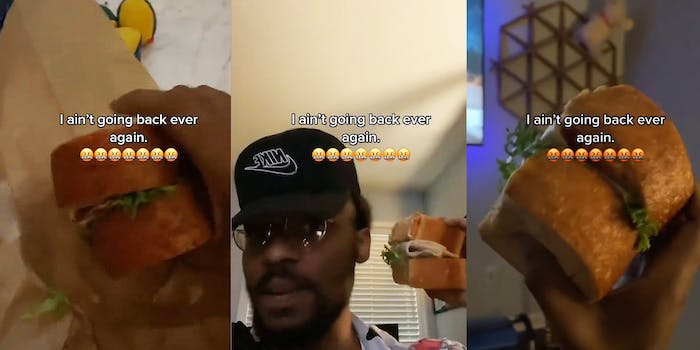 ‘They thought you was Christ tryna feed 5,000 people with all that bread’: First-time Panera Bread customer shocked by giant turkey sandwich

'You ain’t ever gonna be hungry again after this.'

TikToker @preauxxmane says in a now-viral clip that as a first-time Panera Bread customer, he was absolutely shocked to discover that the location he visited took the “Bread” part of the company’s name, very seriously.

“Good food customer service so hard to come by these days!!” he wrote in the caption, followed by three angry face swearing emojis.

“I ain’t going back ever again,” the overlay text in the video reads. The TikToker says in the clip while looking into the camera’s lens: “Now y’all let me know if this is real, bruh. ‘Cause I ain’t never ate at Panamera [sic] bread but y’all let me know something. So I got a turkey sandwich…no tomatoes just turkey bacon and cheese, this motherfucker supposed to look like this shit?”

He then flips his camera around to reveal the sandwich, which is made with two abnormally large pieces of bread. He then picks it up and shows all sides of the meal.

“Look at this, man!” he continues. “I got a money phone sandwich! Look at this shit bruh! I could put this shit to my ear! Texas, Alaskan toast bread is this? How the fuck am I supposed to eat this shit, man?”

The TikTok has since been viewed 1.7 million times, even catching the attention of the official Panera Break TikTok account.

“We’re all about a generous serving but this bread is extra. send us a dm and we’ll treat you to your next sandwich,” the Panera TikTok account commented.

The TikToker, however, quipped that he was a bit reluctant to order at Panera again: “I ain’t gon lie. I might pass. Next time y’all might give me a sandwich shaped like a GameCube.”

Viewers who saw the post were just as shocked but also amused by the customer’s reaction to the bread behemoth he received from Panera. Many folks had jokes of their own, while some were tickled pink by his pronunciation of the popular food chain.

“When I tell ppl I’m tryna get my bread up this is what I mean,” another joked.

“Baby they thought you was Christ tryna feed 5,000 people with all that bread,” one user responded.

“How we compete when Subway got Footlongs? Panera: Foot Talls, get to it,” another user wrote.

Sitejabber’s aggregation of Panera consumer reviews (289 in total) yielded an average of 1.7 out of five stars for the brand. Trustpilot’s average reviews from 697 users culminated in an identical average, with some folks remarking that the items were “overpriced” for the quality of fare they were getting.

The Daily Dot has reached out to Panera Bread via email and @preauxxmane via TikTok comment.