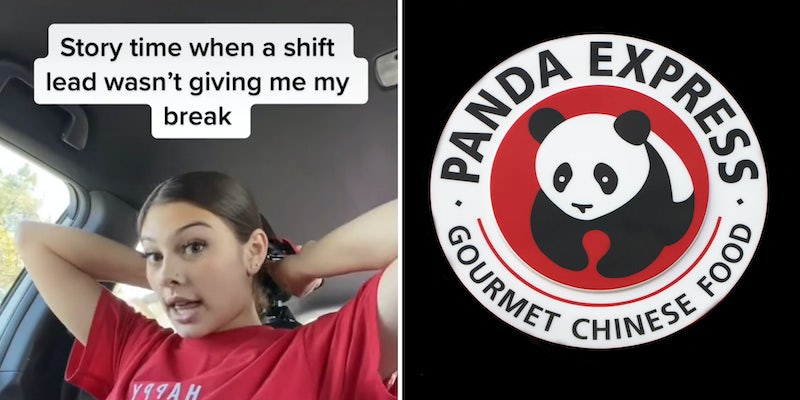 ‘It only gets worse from here’: Panda Express worker says she was denied a break during 8-hour shift

A Pande Express employee’s frustrations about not being given a break during her eight-hour shift is frustrating her fellow TikTokers.

Salina (@salina.555) posted a video earlier this month explaining that she hasn’t been working at the fast-food chain very long, but she’s already learned that employees usually don’t get their 10-minute break. She said during one 9 to 5 shift, she asked for an exception and was told it wouldn’t be a problem.

Per Salina, her supervisor suddenly claimed it would be too difficult to open another register and allow Salina to take her break, so she checked in with the general manager instead. He took over and talked to the supervisor about the situation, but time kept passing, and Salina was still working.

Minutes before 5pm, when she was supposed to clock out for the day, she was finally told she could take a break after she closed her register out—which Salina said takes her about 20 minutes to do.

All said and done, the TikToker not only didn’t get her break but wound up having to work an extra 15 minutes because the managers took so long to sort things out.

“Girl, I’m supposed to be going home,” she said in the video, which by Thursday had over 9,200 views on TikTok.

Although Salina didn’t specify where the incident took place, it would appear she lives in California. Employers there are required to give 10-minute paid breaks for roughly every four hours “or major fraction thereof” worked, in addition to a 30-minute lunch break per five hours of work.

With an eight-hour shift, Salina would have been entitled to two breaks, and viewers were not thrilled that the company seems to be taking advantage of employees’ time.

“Oh hell nah. I would’ve taken my break and clocked out at the time I was scheduled,” @diianua wrote. “And girl once u set the example of them not crossing u should be straight. N if not they hiring literally every where now days.”

Others who claimed to have worked at Panda Express in the past chimed in, sharing similar issues they had run into trying to take breaks.

“Sis it only gets worse from here,” one viewer warned.

The Daily Dot reached out to Salina via TikTok comment and to Panda Express via media contact form.