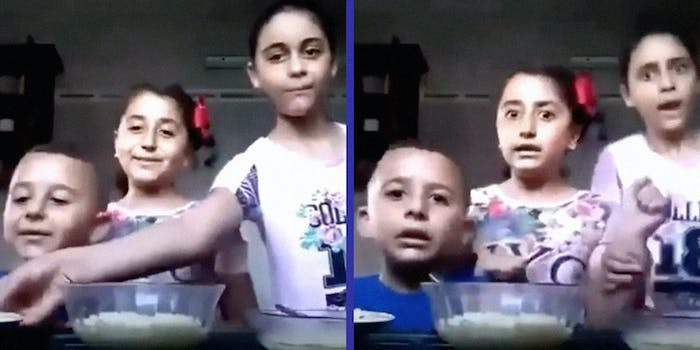 The 2018 clip resurfaced amid escalated violence.

A video of children’s cooking that’s circulating on social media is a harrowing reminder of the constant violence and danger that Palestinian children face. The 2018 has gone viral again amid the most recent violence in Palestine.

The short clip, which on Thursday had over 17,000 upvotes on Reddit, shows three young children animatedly explaining their ingredients and process to the camera.

After 13 seconds, they’re interrupted by a series of explosions and gunfire that sound distressingly closeby.

The children run to the other room, screaming for their parents. And even after they are no longer on screen, the sound of crying can still be heard.

The video has been making the rounds in recent days amid condemnation of the escalation of violence in Gaza that this week has left at least 16 Palestinian children and one Israeli child dead.

The clip of the children cooking is actually several years old, though the context appears to be similar.

“This happened yesterday,” the Palestine Liberation Organization tweeted in July 2018. “The moment when an Israeli airstrike hit Gaza as these three siblings were recording a cooking episode on youtube.”

Regardless of the timing, people seeing the video for the first time or revisiting it again after several years are horrified by the traumatic circumstances children are growing up under in that region.

“A whole generation of kids with PTSD,” commented u/Riaru_NikaiKhan. “This is horrible.”

“They’re kids who just want to escape reality and try to bring light into an abyss. No kid deserves to experience this danger and fear,” u/babsugar agreed.