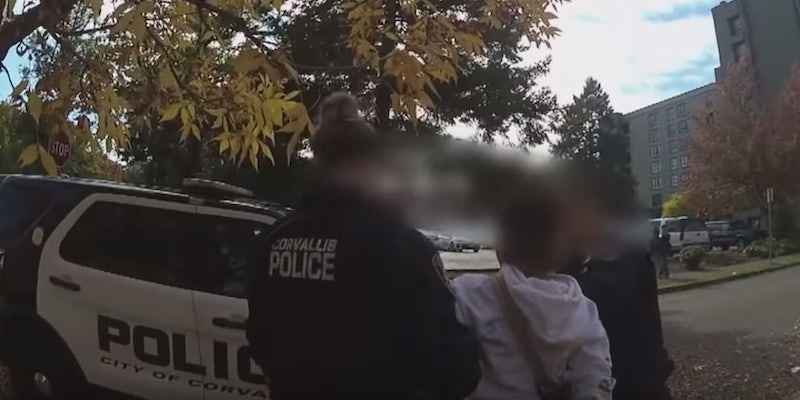 Video: Woman arrested after she exercises legal right to not show ID

'You’re going to arrest me for not giving me information when I was asking why you need my information?'

Recently released video footage shows police arresting a Black 21-year-old woman who refused to show her ID after being pulled over while cycling.

Genesis Hansen, who CNN identified as a Oregon State University student, was caught in an argument with a police officer over a dispute over bike lanes, according to the bodycam footage released on Wednesday.

The 38-minute-long video begins with Hansen standing and speaking politely with the officer in the middle of the street.

“You would have to give me the information, and I’d be more than happy to read it,” Hansen says calmly, “and then go through it politely.”

“We are going through it politely but you’re not complying with a lawful order,” the officer says.

“No, I think I just asked for you to provide me information on that order, and you haven’t provided me information,” she replies, adding that all she wants is for him to show the legislation that says she would have to provide her information “in this case.”

The conversation then goes into the details of the bike lane dispute, for about 20 minutes.

“If you fail to do that I’m going to have to arrest you at this point,” he adds. “Do you understand?”

“You’re going to arrest me for not giving me information when I was asking why you need my information?” she asks.

“Yes, correct … So I would like to get you to cooperate and give me your identification willingly and if you refuse to do that you are under arrest,” he says.

According to ACLU Oregon, “It is not illegal in Oregon to refuse to identify yourself, but police may detain you until they establish your identity.” This means Hansen was within her right to refuse to share her information.

“I would like … more clarification,” she responds to the officer.

“No more clarification,” he responds. “I need you to give me your identification now or you’re going to be under arrest… Which do you want to do?”

“I don’t answer questions,” she responds.

“OK, you’re under arrest, he says before him and another officer grab and fight her to the ground.

“I will comply I need you to get off my back,” she screams at one point, while passerby are heard protesting.

“You’re under arrest for interfering with a police officer,” says the officer.

According to CNN, Hansen was arrested for interfering and resisting arrest, but the district attorney said she won’t be charged as there is no requirement for one to “present driver’s license when riding a bicycle.”