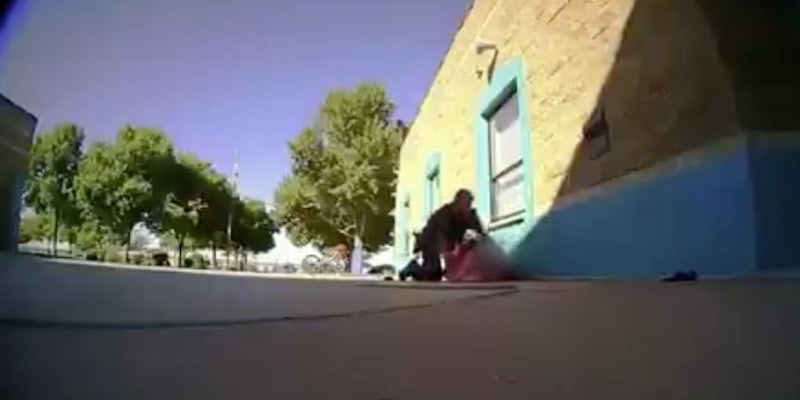 The school resource officer has resigned.

A New Mexico school resource officer has resigned after pushing an 11-year-old girl against a brick wall and then shoving her onto the ground.

A video of the officer using force against the student on Aug. 27 has circulated on Twitter. The footage shows officer Zach Christensen demanding the girl to “stop resisting.” The girl repeatedly says she is unable to follow the officer’s orders because he is physically restraining her and hurting her.

Christensen said one of the reasons the incidents started was because the girl, a sixth grader, had taken “too much milk” at the cafeteria, according to NBC News. The resource officer claimed she assaulted a school staff member, which the local police department later proved to be untrue.

The video also shows a school administrator trying to deescalate the situation. The administrator speaks out several times as the girl struggles to follow the officer’s directions.

“Officer Christensen, she is not a threat to yourself or others,” the administrator says in the video. “We are not going to use excessive force to get this done.”

Christensen is visibly agitated and aggressive in the video. He yells back, “We’re not excessive.”

The video has prompted conversation on social media about law enforcement’s use of excessive force, especially in schools.

“I’m deep in grief hearing this girl cry. It is such a daily toll to see men who are so tiny and weak on the inside be so willing to break every person around them, all so they don’t have to feel for one second that they’re not on top,” Twitter user @fannychoir tweeted.

I’m deep in grief hearing this girl cry. It is such a daily toll to see men who are so tiny and weak on the inside be so willing to break every person around them, all so they don’t have to feel for one second that they’re not on top. Fuck this. #ACAB https://t.co/t5v1GjiRmc

I can’t imagine this man was raised to treat little girls like this. What is it about the police training methods that cause a grown man to have a power trip because a kid isn’t listening to him

She's 11 and he doesn't think he is using excessive force. He's a danger, clearly

— console shades Biden's not even a Democrat (@ConsoleShades) October 23, 2019

This version shows what happened before. The police officer should have never been involved. He injected himself into the situation. I was under the impression that police officers were in the school to protect students not police them.https://t.co/AwYokjdtgw

11 year old girl….unbelievable. If a trained grown man can't handle an 11 year old, he should not be in law enforcement.

The Farmington Police Department released a video on Facebook on Oct. 20 responding to the incident. Police Chief Steve Hebbe said the department has met with the girl’s family, apologized to the student, and has started reviewing its policies on school resource officers.

“Like many of you, I was shocked and angry when I watched this video,” Hebbe said. “There is no excuse for the way this girl was treated.”