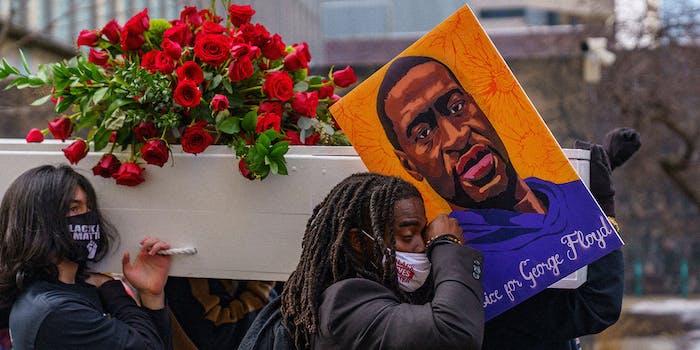 ‘George Floyd is not on trial’: Activists gear up online for Chauvin trial

'The man whose breath was squeezed out [of] his body is not on trial.'

Activists across the country are showing solidarity through social media with organizers in Minneapolis in anticipation of the trial of Derek Chauvin, the white police officer who has been charged with murder in the killing of George Floyd.

Floyd’s death was followed by a swelling of the Black Lives Matter movement and protests against police brutality last summer.

On Sunday, a massive rally took place in Minneapolis. Hundreds marched alongside a white casket, and an organizer read out the names of 470 people who have been killed by police in Minnesota since 1984.

On Monday, as jury selection was about to begin, a judge postponed the start of Chauvin’s trial to Tuesday. Still, Twitter brimmed with photos of showing Minneapolis streets on Monday.

People who weren’t able to protest in person used social media to show solidarity with protesters on the ground. “Solidarity from Ireland,” one user wrote.

Another central issue was the language used to refer to the trial. Activists reminded social media users and news organizations not to call it the “George Floyd trial” since Chauvin is the person being tried.

“The man whose breath was squeezed out [of] his body is not on trial,” wrote columnist Michele Norris.

One user shared digital safety measures for protesters on the streets. The user suggested using a “strong password” and not enabling features that allow you to unlock devices with faces or fingerprints.

Social media is a crucial factor in the trial, not only for supporters of Floyd but also, apparently, for the city. According to TMZ, Minneapolis City Council had plans to hire social media influencers in February to “increase access to information to communities that do not typically follow mainstream news source.”

The six influencers would be paid by the city and would only be posting messages that have been approved by the city, TMZ reported in February. By March, the city canceled this plan following backlash and criticism that it would shape public opinion during the trial.