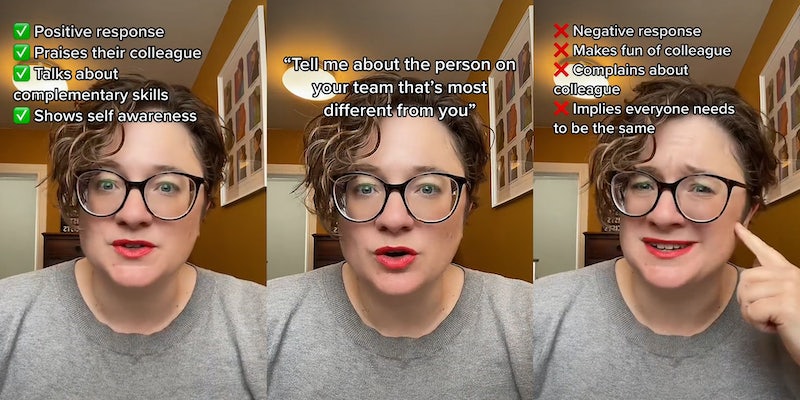 It can sometimes be hard to spot a toxic workplace at the interview stage, but fortunately, TikTok account @valla.uk is helping viewers spot the red flags by asking some revealing questions.

The TikTok account is owned by a company that considers itself a new platform to navigate employment issues. In the video, a woman shares a “killer interview question” when applying for jobs.

“So on my channel, I’m usually talking about the toxic work environments,” the woman in the video says.

“We specialize in helping people stand up to employers who have behaved illegally, discriminated against people, harass people, etc.,” she continues. “But that also means that I’ve learned a lot about how to try and avoid toxic employers.”

According to the TikToker, one question really helps you get a good understanding of whether you’ll be walking into the kind of environment where “you’re not going to have a great time.”

“Here’s the question: tell me about the person on your team that is the most different from you,” she says.

The TikToker explains that if the interviewer leans forward and gets really excited about how this other person is so different, and they “value how different they are, and they complement each other skills, that’s a good sign.”

On the other side of it, “if they tell you that they just don’t understand the other person and that they really think it’s a problem and they dismiss them, that’s a bad sign,” she continues.

Commenters were very receptive to this idea, with one saying, “Great advice – especially for me because I’m usually this “different” person in the team.”

The TikTok received over 968,000 views, with many viewers sharing examples of their own experiences and toxic workplaces.

“Tell me what you have changed recently based on feedback from your team,” is a question one commenter suggested people should ask since it, “tells [you] a lot about their values.”

Another commenter suggested the question, “What’s your favorite thing about working here, excluding pay and benefits?” They explained that if they speak about the company, the atmosphere, and their colleagues, those are all good signs. “But if they say ‘the customers, pay, benefits, etc’, it’s not a good workplace,” they wrote.

The Daily Dot has reached out to the creator via TikTok comment.