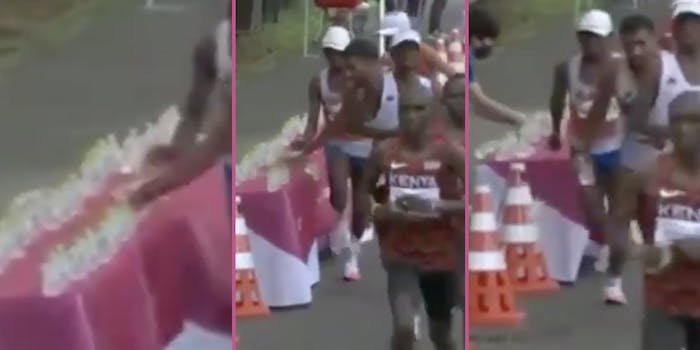 'I’ll probably let the audience be the judge as to whether that’s been done deliberately.'

An Olympic marathoner was filmed knocking over a whole row of water bottles meant for competitors in the event which took place Sunday in Sapporo, Japan.

The incident, involving French runner Morhad Amdouni, was captured live and globally via TV coverage of the massive sporting event, but was further signal-boosted across social media.

That included by Australian Olympian Ben St Lawrence, who asked, “Thoughts on Amdouni knocking over an entire row of water before taking the last one?” on Twitter. The accompanying eight-second clip he posted has received more than 4 million views as of Monday morning.

“Total weasel,” said one respondent. “No way that’s an accident, his hand is wide open and he’s sweeping.”

Another stepped in to defend the runner, though, stating, “Shit editing mate. There was another table of water just down the road out of camera shot. He genuinely tries to pick one up while running at 3 mins /km. Very very hard to do. The second table meant no one would go without. Watch the next 10 seconds of race b4 you judge him.”

Redditors certainly had thoughts, with one posting it to the colorfully named subreddit r/iamatotalpieceofshit and declaring the move an “example of bad sportsmanship.”

“He should be disqualified from the race,” one opined.

Another remarked, “If I was behind that guy he’d definitely be getting his heels stepped on the rest of the race.”

Some were more equivocal as it happened. According to 7News’s coverage for Australians, analyst and Olympian Dave Culbert remarked, “I’ll probably let the audience be the judge as to whether that’s been done deliberately.”

Piers Morgan, as is his way, was less equivocal, taking to Twitter to declare Amdouni as the winner of the “gold medal for biggest d*ckhead of the Tokyo Olympics.”

One respondent offered up another nominee: a British boxer who refused to wear a silver medal on the podium after losing his gold medal bout.

However, another respondent took the opportunity to call Morgan a “raging racist.”

And yet another observed that the runner was “clearly stumbling,” adding that there was a water table after the one in question with bottles for competitors to take.

“Would love to see you try and collect a bottle at 17mph Piers,” the respondent added snarkily.

Amdouni finished 17th in the race.