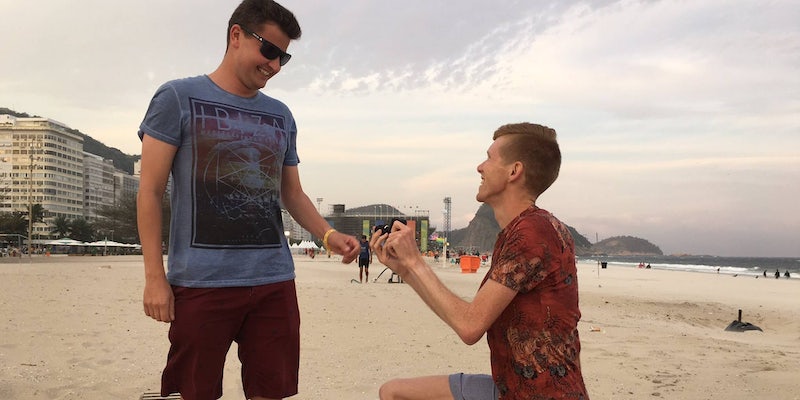 It's the second gay athlete proposal at the Rio Olympics.

It’s been a historic Olympics for LGBT people in sports. With at least 46 openly LGBT athletes that we know of, there are more competing this year than ever before.

And now, we have another historic moment: Olympic race walker Tom Bosworth decided that the Rio Games were a great place to pop the question to his boyfriend, Harry Dineley.

Bosworth didn’t win gold this year—coming in 6th overall in the 20 kilometer walk—but he won the heart of his boyfriend of five years when he knelt down on a beach in Rio on Monday and asked for his hand in marriage.

The heartwarming moment came just three days after 26-year-old Bosworth smashed British race walking records while finishing in sixth place (he was ranked 37th in the world prior to the race).

And of course, Dineley said yes—showing off his ring to the world in a photo posted to Twitter.

The couple’s engagement isn’t the first same-sex marriage proposal at the Rio Olympics. That moment came Aug. 9th, when Brazilian stadium manager Marjorie Enya walked out onto the rugby field after a loss to Australia and proposed to player Isadora Cerullo. The Brazilian lesbian couple lives in Sao Paolo, where same-sex marriage is legal.

Both proposals are notable in contrast to early reports that soccer players on the U.S. women’s national team endured homophobic taunts during one of the first matches at the Rio Olympics.