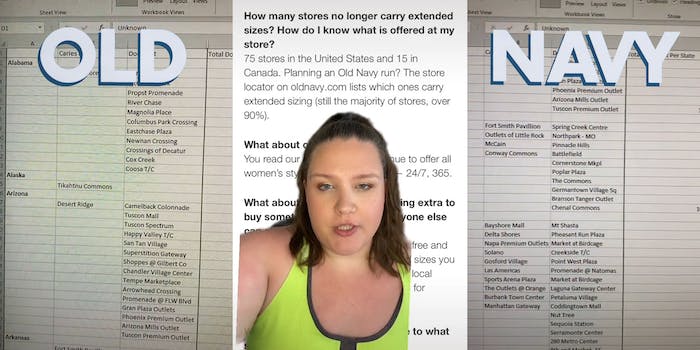 Old Navy said it removed inclusive sizing in 75 U.S. stores—but a TikToker is fact-checking that number

'We are not an anomaly, but we are made to feel that way by the clothing industry.'

When popular fashion retailer Old Navy announced last August it would eliminate separate sections for women’s inclusive sizing in their stores, plus-sized people rejoiced. But less than a year later, the Gap Inc.-owned brand announced on May 26 that it would scale back on its “BodEquality” initiative and remove inclusive sizing from 75 stores in the United States and 15 in Canada.

According to the update on their website, Gap Inc. claims they have “not seen the expected demand for extended size products in [their] stores channel.” On their earnings call, CEO Sonia Syngal claimed, “while we believe that product quality is right for today’s consumer and delivers on Old Navy’s mission to democratize styles, we launched too broadly and too quickly.”

Ever since the announcement, plus-sized creators on TikTok have spoken out in criticism against the brand. One TikToker, in particular, took it upon herself to tally whether Old Navy would stick to their word and remove extended sizing from 75 stores only. User Christine, who goes by @mightymurphinfashion on TikTok, created a spreadsheet to track how many stores in the U.S. carried plus-sizing after the announcement.

Christine told the Daily Dot she began compiling the list because “how would people know [the plus sizes] are carried at these stores if the website is not accurate?”

In her initial video, which received more than 300,000 views, Christine says there were more than 100 stores that did not carry the sizes. But in a follow-up video, she claims Old Navy updated its website two days after her TikTok went viral. Christine believes this is no coincidence.

“Even if they are not acknowledging us on social media they are clearly watching and listening,” she says in the video.

Christine told the Daily Dot via email that she was able to get through 28 states before they started updating the website.

“At that point, there was no way that I could continue because I could not see the same data,” she wrote. “I have 31 completed at this time and am working my way through the 32nd while I have Covid.”

Christine is urging all her followers to keep pushing for change and to sign a petition she started and linked on all her socials. The Change.org petition states, “We, as plus-size people, have so few options already. The options we do have are almost always offered online alone. Having options online is great, but only offering online options creates barriers for many customers who live in larger bodies.” It has since gained more than 800 signatures at the time of publishing.

“The plus-size community is tired of feeling like the scapegoat for poor numbers,” Christine told the Daily Dot. “80% of the apparel market is geared toward straight-sized people, but 70% of US women are a size 16 or above. We are not an anomaly, but we are made to feel that way by the clothing industry.”

Christine isn’t the only plus-sized TikTok influencer to bring awareness to the issue. Body-positive influencer Mary Fran (@itsmaryfran) shared the experience she had at an Old Navy store on the platform where it went viral with more than 2 million views. The creator claimed her local Old Navy location had zero plus-size clothing in sight. When she asked the employees about it, they allegedly said they did have a few 2XX and 3XX in the back but they are not displayed on the floor.

“I’m embarrassed that I have to ask that fucking question but also as a fat person, I remember how monumental this moment was,” Mary Fran says, referring to the BodEquality initiative in August 2021. “And now I’m embarrassed because they don’t have my size anymore.”

Old Navy initially claimed they would offer sizing from 0 to 30 during the inclusive launch last year. Christine mentioned that her local store only had up to XXL.

“Why did you create body inclusive sizing if you’re not going to keep it up in stores?” Christine asks. “Oh, I know why. Because it’s fucking performative.”

Following the scale back, it is unclear when Old Navy would start removing the sizing from their physical stores.

“Once again we’re back to me as a fat person having to scramble for things,” Mary Fran says in her TikTok and I live on an island so I can’t access a lot of things. Do fucking better Old Navy.”

The Daily Dot has reached out to Mary Fran via Instagram DM and Old Navy via email for this story.