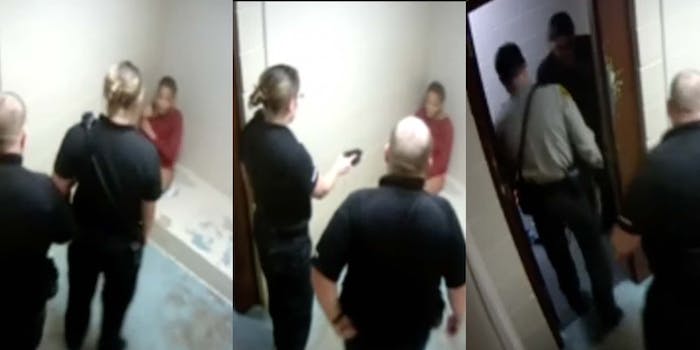 The woman said she continuously asked for privacy and expressed fears of being sexually assaulted.

In a recently released video, two corrections officers and a sheriff are shown pointing a taser at and stripping Ariel Harrison, a Black mother who is reportedly partially blind, as she continuously allegedly asked for privacy and expressed fears of being sexually assaulted.

The video is from October 2019 and shows a holding cell in McDonough County Jail in Macomb, Illinois. The Democratic Women of Mcdonough County (DWMC) obtained the video via Freedom of Information Act (FOIA) requests and made it public. The law enforcement officers seen in the video are with the McDonough County Sheriff’s Office.

Harrison detailed what allegedly transpired at an event for racial justice. According to Harrison’s account of her arrest, an officer pulled her over shortly after she went to the liquor store. Saying he smelled liquor in the car, she said he asked her to step out of her car. Harrison said she had not been drinking. She was reportedly put into a squad car but was not handcuffed.

The DWMC submitted FOIA requests for the dashcam footage of Harrison being pulled over and taken to the police station, DWMC President Heather McMeekan told the Daily Dot. The DWMC’s requests were reportedly denied.

“What did I do? I didn’t do nothing wrong,” said Harrison, remembering her pleas to officers.

In the dashcam footage, she is then forcibly stripped by two corrections officers. Shortly after, another male officer enters the holding cell, kneels on Harrison’s legs, and removes her underwear. Harrison is then seen sitting in the cell naked.

On June 4, Harrison was reportedly found guilty of driving while under the influence and resisting arrest.

The Daily Dot has reached out to the McDonough County Sheriff’s Office.