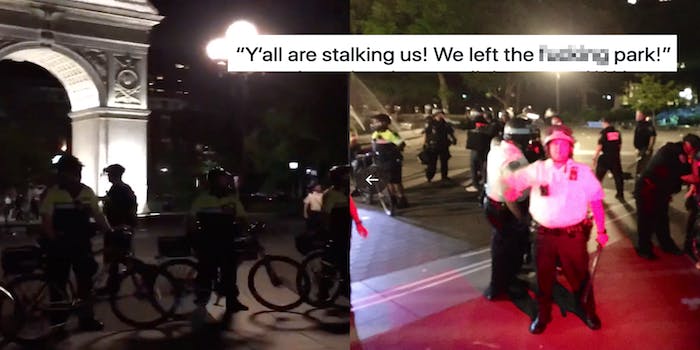 Police arrested more than 23 people during the curfew enforcement.

A video of police officers on bikes and in riot gear chasing people out of a New York Park on Saturday night has gone viral on Twitter with more than 1.7 million views.

The New York City Department of Parks & Recreation and Police Department declared a 10pm curfew for Washington Square Park on Fridays and weekends to cut down on disorderly behavior and large crowds.

As the night approached 10pm, people were still hanging around the park, talking and riding scooters. Tension escalated when police officers on bikes showed up to clear the park.

A Twitter thread describes the events with commentary and videos showing police officers with helmets and batons riding bikes and creating a line to push people out of the park. An announcement over a loudspeaker tells people that if they left voluntarily, they would not be charged with unlawful assembly. Park goers chant, “Hell no! We won’t go!”

Throughout the night, many people whipped out their phones to film the interaction between police officers and park goers.

“The whole world is watching y’all,” one man says. “Remember that.”

In the video, officers begin shouting “Move back!” in unison as they push their bikes forward. One man says to an officer, “Don’t mistake the gun for a Taser,” referencing the killing of Daunte Wright by a Minnesota police officer who allegedly mistook her gun for a stun gun.

While some people chant “Move back,” and “Fuck 12,” at the police officers, one person tries to reason with the cops. “We know you’re tired,” the person says. “So are we. Why are we doing this to each other?”

The police officers continue to push the crowd forward. At one point, people throw water bottles at the police officers. A park goer using a megaphone says, “How does that feel? As long as you’re not a child getting shot in the back like we usually get?”

Even when people are eventually pushed outside the park, police officers continue to push the crowd further from the park. One person grabbed an officer’s bike. The viral video shows police officers following and chasing after people amid shouts to film the interaction.

“Y’all are stalking us,” one woman says to the police officers. “We left the fucking park. So go the fuck home. Suck my dick. You’re harassing us.”

According to the New York Times, 23 people were arrested, and eight officers were injured.

Dianne Morales, a former nonprofit executive director and public school teacher running for New York City mayor, said on Twitter that the behavior by the NYPD was appalling.

“@NYCMayor must act immediately to stop this violent abuse of power and provide services to those in the park who are in need,” Morales tweeted.

People online were also outraged at the police officer’s use of force.

“My theory is that they overhired during the protests, and the police being a gang that’s notoriously good to their own, have decided rather than letting them go/reassigning them, to just manufacture reasons for their continued existence,” one user commented on Twitter.

Others online asked how they could contribute to jail support, an abolitionist and often mutual aid organized practice that involves people providing water, food, clothing, or money to support people as they are released from jail.

“It’s being there for people, offering them community immediately after a really traumatizing experience,” said Amanda Lawson, co-founder of the prison abolitionist group Dollar Bail Brigade in an interview with Teen Vogue. “It is a group of people offering what they have to support people.”