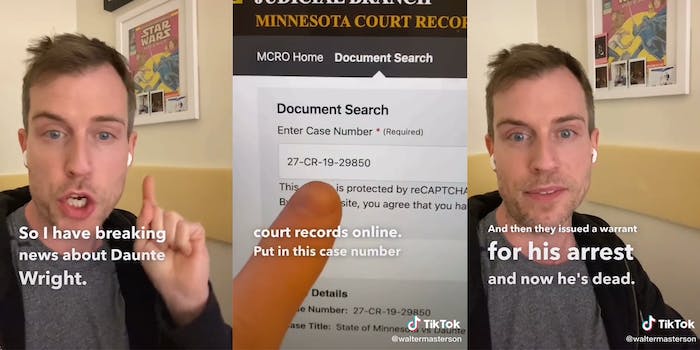 'This next part is really messed up, and I'm sorry.'

A TikToker claimed in a viral video to have exposed the damning reason Daunte Wright had a warrant out for his arrest before being fatally shot by police.

Unfortunately, he’s got the story wrong.

The 20-year-old Wright died after being fatally shot by Officer Kim Potter at a traffic stop in Brooklyn Center, Minnesota, then getting into his car and crashing a few blocks away. He was unarmed. Wright’s death at the hands of police prompted protests that are likely to persist for days, if not weeks.

Actor and TikTok comedian Walter Masterson, who routinely heckles conservatives in his videos, uploaded his TikTok about Wright last night. He claims to have “breaking news” about the “tragic” reason Wright had an outstanding arrest warrant.

Wright was pulled over with expired plates, as well as for having an air freshener hanging from his rearview mirror, but police attempted to detain him when it was revealed he had a warrant out for his arrest.

Masterson goes to the Minnesota Judicial Branch’s website and accesses its public court records. He enters the case number “27-CR-19-29850,” which brings up documents for the case titled “State of Minnesota vs Daunte Demetrious Wright.”

The case shows Wright was initially charged with first-degree aggravated robbery in December 2019. The most recent document uploaded to Wright’s case file on Feb. 5, 2021 was a piece of returned mail. The five documents uploaded prior to that were notices of a hearing, which appeared to be remote, based on a Jan. 8 upload.

As Masterson puts it: “Daunte Wright had a warrant out for his arrest because the notice for the Zoom hearing was sent to the wrong address.”

“Yep, you got it right,” he continues. “They sent the notice of hearing to the wrong address, and then they issued a warrant for his arrest, and now he’s dead.”

The video has nearly 1 million views combined on TikTok and Twitter.

However, it’s false. While the returned mail exists, it is a separate case against Wright where the warrant was issued. He was issued an arrest warrant over a failure to appear for a hearing in a case for carrying a pistol without a permit. That case is “27-CR-21-4400.”

Many commenters on Masteron’s TikTok agreed with his sentiment that the reason for Wright’s outstanding arrest warrant at the time of his death was outrageous, even if misleading.

“I don’t care if he had a warrant out for his arrest and it was actually real,” one user said. “Unless it was a warrant for murder. He did not deserve to die.”

While situations like that certainly do happen, that’s not the case here.