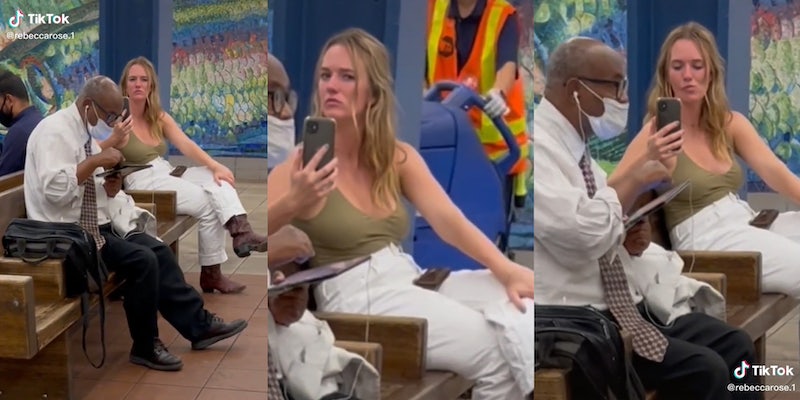 ‘Like what is she recording? He’s literally just chilling’: Nosy Karen films Black man who is on his iPad

The woman was reportedly recording him 'for 15 minutes straight with an evil smirk.'

A viral TikTok video shows nosy Karen recording an older Black man while he is on his iPad, minding his own business.

Rebecca Rose (@rebeccarose.1) filmed and posted a video of a white woman recording a masked Black man getting stuff done on his iPad while waiting at his New York City subway stop.

The caption reads: “Can I help you I can’t make this up! #nyc #xybca#whenyourblack #nycsubway #foryoupage #beingblack #viral#neveralone.: The sound echoes the caption: “When you’re Black, you’re never really lonely because there will always be a white person all up in your business.”

The comments mostly show support for the older gentleman. One person wrote, “Like what is she recording? He’s literally just chilling.” Another said, “Awww he’s so sweet on his iPad just minding his own business.”

A third commented: “He’s wearing his mask. Minding his business. Not bothering or disturbing anyone.”

The woman seemingly eventually notices that she is being recorded but continues recording the man while making a face.

One commented about the woman, “It’s her facial expressions for me. Why do I feel rage?”

In the comments, Rose says the woman was recording “for 15 minutes straight with an evil smirk looking around to see if anyone can see her.”

The Daily Dot has reached out to Rose for further comment.