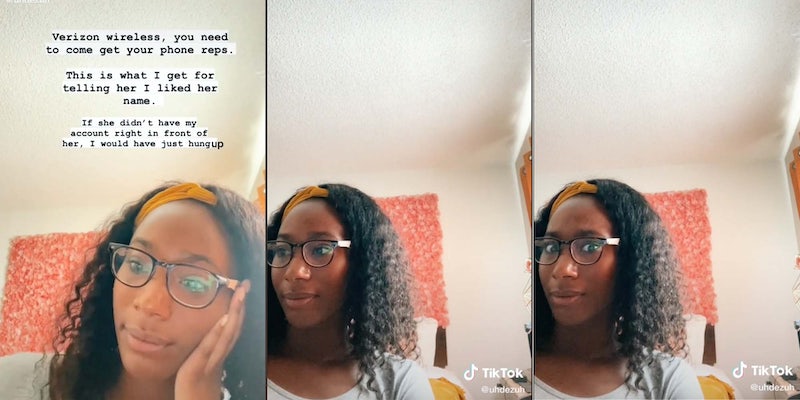 ‘What she did was inappropriate’: Black TikToker records Verizon Wireless employee’s unprompted rant about slavery

In a TikTok posted on August 25, a Verizon Wireless employee talked at @uhdezuh, a Black customer, over the phone about slavery and human trafficking unprompted.

“If she didn’t have my account right in front of her, I would have just hung up,” wrote @uhdezuh in the overlay text on the video.

“Slaves have been around since Egypt’s days, Mayan and Incan days,” the employee tells @uhdezuh. “The Aztecs used to enslave the Mayans.” She also tells @uhdezuh that the movie Taken is “more true than people realize.”

@uhdezuh is seen looking at the camera quizzically.

“Girls are kidnapped to be sex slaves,” the employee continues.

In a follow up video, @uhdezuh said that their call lasted approximately ten minutes. At the beginning of their conversation, @uhdezuh told the employee she “liked her name,” which launched the employee into a long explanation of where her name came from.

Because the employee’s mother chose her name, the employee then told @uhdezuh of her mother’s extensive collection of Disney movies. The mother was unable to acquire one Disney movie because “Disney stopped releasing it because it was racist.”

@uhdezuh told the Daily Dot in a TikTok direct message that the movie she was referring to was Song of the South.

@uhdezuh said in her video that she should have not acknowledged the woman’s comments, but instead asked her if she agreed with Disney pulling releases of the movie.

The Verizon employee then told her that “slavery is part of our history,” has “happened in other places” outside the U.S., and that there are “white slaves currently.”

“I did not ask for it at all, it was very unprompted,” @uhdezuh said of the entire interaction. In the caption for the video, she wrote that although the employee was helpful, she was “offensive” and came off as “a bigot.”

@uhdezuh clarified that the employee was helpful, but she ended up reporting the employee.

“They may not fire her, but they should let her know that what she did was inappropriate,” said @uhdezuh. “And that she should never do it again.”

@uhdezuh told the Daily Dot that she has heard nothing back from Verizon.

“I would like just a confirmation that they’re handling it,” said @uhdezuh. “At least making it clear that [her] behavior was unacceptable and won’t be tolerated in the future.”

Verizon Wireless did not immediately respond to the Daily Dot’s request for comment via email.