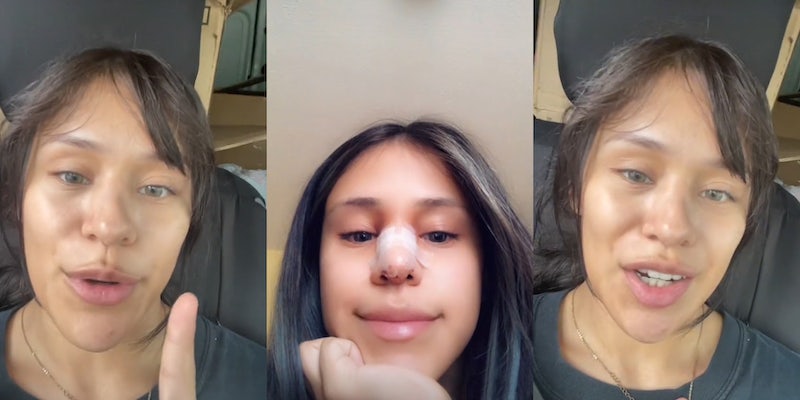 ‘And he ended up cheating on me again’: Woman says she had boyfriend buy her nose job after catching him cheating

'Gotta use them to our advantage like they use us.'

A woman on TikTok says she had her boyfriend buy her a nose job after he cheated on her. She claims he then cheated on her again.

The TikToker (@userg01728011) says she told her boyfriend at the time that she would continue to see him even after he cheated if he paid for her nose job. She adds that her boyfriend caused her to have a lot of insecurities, so it was only right. Plus, she didn’t want to waste her time with him, given the risk that he might cheat on her again.

“Yeah and he ended up cheating on me again,” the TikToker adds in the video.

Still, staying with him until she got the nose job was “worth it,” the creator says.

@userg01728011’s video stitched a TikTok from another creator, @itslilrockyy, who joked that money would make up for their partner cheating on them.

You know I can’t stay mad at you, stink

♬ Glimpse of Cash – There I Ruined It

As of Monday, @userg01728011’s video received more than 2 million views and over 1,500 comments. Multiple viewers applauded the TikToker for making the most of the situation.

“Girl that is so smart,” one viewer commented.

Another commented, “Lol period! Get that money girl!!!!”

The TikToker isn’t the only girl to milk money out of her cheating boyfriend. Several viewers shared their own similar stories in the comments.

“I Made him drop 6k on my lipo then dipped,” one user said.

“Lmaoooo I did the same thing!!! I told him he owes me $2000 for his collateral damage he caused me,” another user wrote.

“I asked for my rent to be paid until the lease was up when I got cheated on,” a third claimed.

One user even said they blocked their ex on every platform, so the only way he could get in contact with her was through payments on Venmo. “Ex cheated and I made him pay for an entirely new phone then blocked him on everything but venmo so for the longest time he sent $ to get in touch,” they said.

Some TikTokers said these women were justified in asking for monetary compensation after their boyfriends had cheated.

“Gotta use them to our advantage like they use us lol,” one user said.

The Daily Dot reached out to the creator via TikTok comment, as other methods of contact were unavailable.