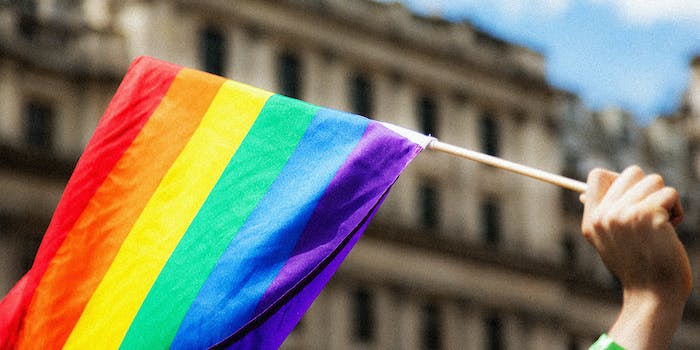 The incident occurred at Seminole Middle School in Florida on May 28 but received traction in June when the video went viral with more than 236,000 views.  The older sister of the students demanded #JusticeForLeo on Twitter and asked followers to call the school.

The 45-second video shows two groups of students wrestling over a rainbow Pride flag in a shout-filled tug of war. According to Leo’s father Benjamin Hoffman, Leo was eating with their friends at school when another student grabbed their flag and threw it in the trash. Leo retrieved it from the trash and wore it like a cape before the previous student grabbed it again, knocking Leo to the ground.

“Leo was frightened,” the father said in an interview with Bay News 9. “Not so much for themselves but for their friends. Leo is very strong and would do anything to protect their friends.”

According to a 2015 National School Climate Survey, 75% of LGBT middle and high-school students from Florida reported experiencing verbal harassment based on sexual orientation and 56% based on gender expression. LGBT students were also more likely to miss school because they felt unsafe.

Leo’s father shared that he decided to keep Leo out of class as the school session came to a close.

Outraged users called the school and posted TikToks in hopes of giving the incident more attention.

“Scary to see, and I encourage you all to help in any way you can,” the caption reads on a TikTok video with more than 175,000 likes and almost 1 million views.

“As another nonbinary middle schooler, this is horrible,” one user commented. “I don’t know how the other kids were raised but clearly their parents and teachers are teaching them the wrong things.”

Leo’s older sister, Ashleigh, tweeted on June 1 that the main boys involved had been suspended. Pinellas County Schools told the Daily Dot that some of the students have also been reassigned to an alternative school.

“Pinellas County Schools does not tolerate this behavior,” the statement said. “The students’ behavior was inappropriate and unacceptable.”

Some people online thought being suspended was too light of a disciplinary measure.

“Suspension? Really?” one user commented. “This is a hate crime. There needs to be something more severe done.”

The school session ended on June 9, but Pinellas County Schools told the Daily Dot that the principal at Seminole Middle School has directed all of the school’s teachers to review the school’s values of respect, tolerance, cooperation and diversity. In the fall, the school will also be implementing the Olweus Bullying Prevention Program.

The Daily Dot was unable to reach Ashleigh for a statement.