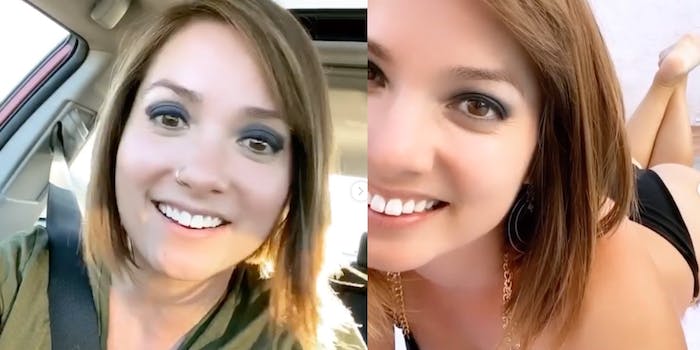 'The only real loss is if you stop yourself from reaching your destiny.'

A woman who says she became an evangelical pastor because of her “love for performing” is now a hit on OnlyFans as a stripper—and fulfilling her childhood dream, she told the New York Post.

Nikole Mitchell, who grew up Baptist, told the Post she had “always fantasized about being a stripper” and has also come out as bisexual.

“But I was indoctrinated to believe my desires and my body were innately sinful and bad,” the 36-year-old said.

Her upbringing was fiercely conservative and taught her that women can’t be leaders and that their place is in the kitchen.

“So even though it went against everything I was told, I decided to become [a pastor] because of my love for performing,” she said.

Mitchell’s realization regarding her own sexuality came about in 2016 when she attended a play exploring themes of LGBTQ identity, which she says “rocked [her] world.”

“I was like, ‘Oh my gosh, I don’t think I’m straight,’” she said. But she was worried that the church she was part of would not accept it because of its anti-gay stance.

She’d been a pastor at a St. Paul, Minnesota, church that she’d joined with her now ex-husband. According to the Post, after she joined, she was invited to be a pastor, tapping into her dream of being on stage facing an audience of thousands.

Now, with more than 13,000 followers on Instagram, she routinely blogs about her journey and the positive turn it has taken.

“This isn’t about manipulating people or systems to get an end result,” she wrote in a post from August alongside a photo of her modeling thongs and stockings. “It’s about ALLOWING yourself to have what you want: a bigger reach, a bigger influence, a bigger income, and the kind of opportunities you dream of. There’s nothing wrong with wanting more.”

“Being in integrity is more important than being understood,” she wrote in a list of lessons she shared with her followers. “The only real loss is if you stop yourself from reaching your destiny.”

In a video she posted on Friday, she welcomed her new followers and announced that she has been invited to Jimmy Kimmel Live!

“I’m so happy that my story spoke to you, resonated with you, intrigued you and that you’re here!” she said cheerfully as she drove to Arizona for a photoshoot. “I’m a real person! That article was legit.”