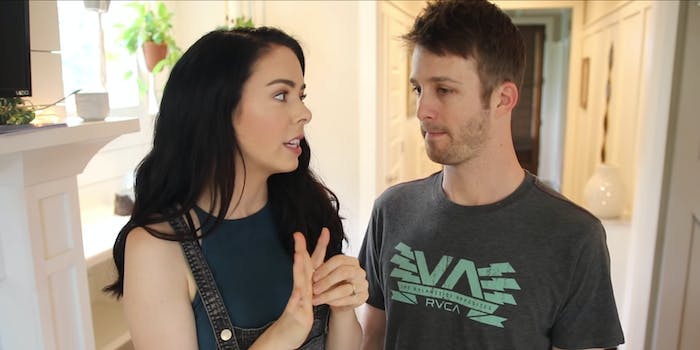 ‘Glad they didn’t adopt’: Influencer couple who put down dog once turned down adoption due to no social media rule

The video resurfaced following the controversy surrounding their dog.

Nashville-based YouTubers Nikki and Dan Phillippi are receiving even more backlash online after an old video of theirs resurfaced.

The couple was already on the receiving end of backlash after announcing on May 3 that they euthanized their dog, Bowser, after he bit their son, Logan. “Even if you suck enough to do this, how are you so impervious that you let people know what happened??” one user commented on Reddit at the time.

A video in which they explained why they were no longer adopting a child from Thailand resurfaced in the aftermath of the Bowser controversy. In the video from May of 2018, Nikki says Holt International, a Christian organization that connects children to adoptive families, told the couple that Thailand has a law that prohibits the sharing of any images, photos, or videos of the child for up to a year.

The couple says they decided to pray and sleep on it after Nikki consulted her family and assistant. Nikki says Holt International also told her to take the social media policy seriously, as it could ruin the organization’s relationship with Thailand and future adoptions for other families.

“I almost Snapchatted while I was singing an NDA once,” Nikki says. “I’m going to totally mess up, and then I’ll ruin it for other families.”

Although not being able to share her child on social media was part of the consideration, the couple says in the video that the main factors were the possibility of the adoption not being final for up to a year and the possibility of jeopardizing other families’ adoptions.

“It came down to I could make some people mad or there could be cultural differences that end up making someone decide, ‘Oh we actually don’t want you to have our kids, so they’re coming home,’” Nikki says.

Dan also says he didn’t want any foreign government in his business after he adopted a child.

“We just want the ability to do what we want to do without possibly causing harm or  repercussions to other people and an entire organization for that matter,” Nikki says.

After pulling out of the Thailand program, the couple started looking in Korea instead. But four months later, they made another video announcing that they were no longer adopting from Korea as well.

“Our adoption agency strongly feels that a Korean judge will not approve an adoption for us because of how public we are in our advocacy for adoption,” Nikki says in the video.

The couple also says they don’t want to put in the emotional attachment and time if they are unlikely to be guaranteed an adoption, despite it being crushing to keep switching programs.

“Haters gonna hate, and the goal was to be honest about the speedbumps,” Nikki says.

Three years later, and the hate is still coming. Users on Reddit are outraged that one of the couple’s reasons for deciding against adoption was not allowing the child on social media and are accusing the couple of just wanting to profit off their child.

“They didn’t even want to wait a year,” one user commented. “Glad they didn’t adopt.”

In a video on their foster care experience, the couple reflects on their Thailand adoption experience and admits that they have matured since then.

“I think God has worked on our hearts and exposed us to different things, but at the time, we didn’t like the idea of knowing that a foreign government could potentially take back our child up to a year later based off whatever they saw on social media,” Nikki says in the video. “We were just feeling a little paranoid.”

Nikki and Dan Phillippi did not immediately respond to the Daily Dot’s request for comment.