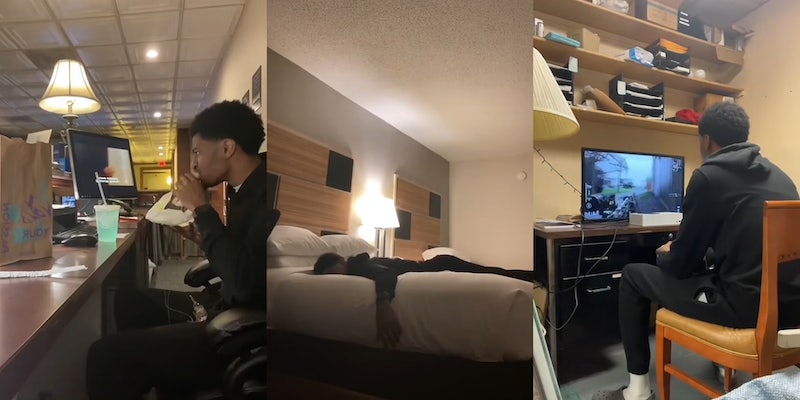 ‘Is working front desk at a hotel really this easy ?’: Hotel employee shares what the overnight shift is like, sparking debate

'I did night audit for a long time and this is SO accurate.'

In a viral TikTok video, a hotel front desk employee shares what he does during his night shift, sparking questions from viewers in the comments.

User @femomvny10 begins the video by saying, “Another day, another dollar. The night supposed to be busy so I gotta–” user @femomvny10 says while clocking in, before immediately interrupting his shift with a trip to Taco Bell.

After he purchases his food, he returns to the hotel and watches Hardcore Henry on his computer. Next, he goes to the pool to swim for an hour, which is followed by an hour-and-a-half-long nap. Awake from his slumber, he plays Call of Duty and finishes the shift by making a cup of coffee and taking out the trash.

As of Sunday, the video has been viewed 3.9 million times. While the TikToker’s video appears to be a joke, several users had different questions for @femomvny10 about what his job duties are.

“What are the actual duties and responsibilities? Just to be on call in case a guest needs something?” one user asked.

“What happens if he’s asleep or gone when someone comes to the desk,” a second inquired.

“Is working front desk at a hotel really this easy ?” a third questioned.

The creator answered one viewer in the comments, stating that he works at an airport hotel. Others claiming to have manned a hotel front desk for the night shift shared similar experiences.

“My ex would work overnight man we would be lit lol i was a housekeeper and he was the maintenance man lol,” one person said.

“i did night audit for a long time and this is SO accurate. I hated when we were sold out cuz I didn’t get my nap!” a second wrote.

“This is how front desk was for me. So laid back lol. I was bringing my ps4 & laptop w me and eatin tbell too miss it.” a third added.

This isn’t the first video of @femomvny10 recording his antics while working the night shift. He’s shared several comedic videos that showcase his life as a front desk attendant.

Update 10:27am CT, Aug. 23: @femomvny10 told the Daily Dot he has worked at the Red Lion for a little over two years as a front desk agent. “It’s hardly ever busy at night which gives me a lot of free time to do other things,” he said.

He added that he didn’t think his video would “do as well as it did.”

“I knew it would catch peoples attention cause of how unconventional it is to do those types of things at work,” @femomvny10 said.

He also said he is not worried about getting fired and encouraged people to “have fun no matter the setting.”

“Life is too short to worry about getting fired,” he said before adding, “Ok I’m just kidding, don’t get fired but make sure your enjoying yourself no matter what you do.”