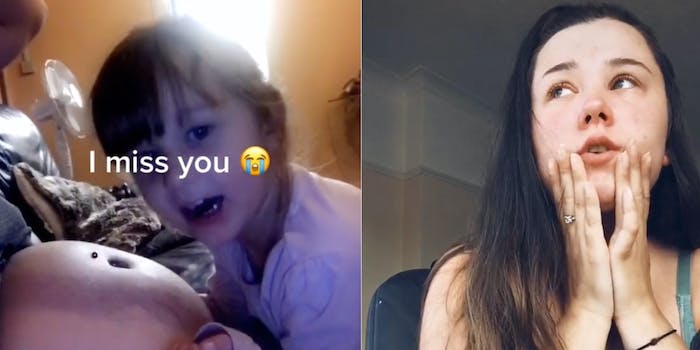 ‘Just in case anyone was wondering what real evil looks like’: Woman makes dancing videos after killing 3-year-old daughter

Nicola Priest made videos before and after the killing of her daughter, Kaylee-Jayde.

A woman posted TikTok videos about the death of her 3-year-old daughter before being convicted in her killing.

The 23-year-old U.K. woman, Nicola Priest, used the TikTok account to seemingly mourn her child, reportedly saying in one video that she “will never forget” her daughter, Kaylee-Jayde Priest, referring to Kaylee-Jayde as a “darling” and “angel.”

“I should have done better, I’m sorry mom and dad,” she seems to cry in another, partially lip-synching the words to the song “To My Parents” by Anna Clendening.

Priest was found guilty of child cruelty and manslaughter in her daughter’s Aug. 9, 2020, death, according to Business Insider. Priest, according to the BBC, was sentenced to 15 years in jail on Friday.

Before Kaylee-Jayde’s death, Nicola Priest reportedly posted videos of the two “dancing”—she, according to Daily Mail, grabbed Kaylee-Jayde like she was a puppet and moved her to the music. She is being accused of using Kaylee-Jayde as a “prop” for her TikTok account, @nikkip210, which boasts over 1,000 followers.

Priest’s most recent videos—from 2020—feature her dancing and showing off her makeup purchases. The majority of comments on Priest’s videos allude to Kaylee-Jayde’s killing and are critical. “Just in case anyone was wondering what real evil looks like,” one viewer commented.

Priest’s 22-year-old ex-partner, Callum Redfern, was also found guilty of manslaughter in Kaylee-Jayde’s killing, according to the BBC. He was reportedly sentenced to 14 years in prison.

Justice David Andrew Foxton said during the duo’s sentencing on Friday that the two were trying to have sex on Aug. 8 when Kaylee-Jayde wanted to play rather than go to sleep. They reportedly beat her as a result, according to the BBC. The 3-year-old, reportedly according to a press release from the West Midlands Police Department, “suffered catastrophic abdominal and chest injuries, including fractured ribs” during what Prosecutor Andrew Smith described as a “sustained assault” when speaking to the jury. Neighbors testified in court that they witnessed Priest hit Kaylee-Jayde in the past.