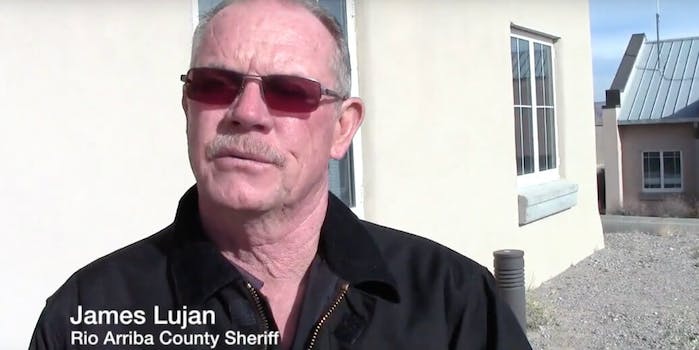 He denies the gesture was anything more than a game.

On Sunday, a photo posted to Instagram showed Rio Arriba County Sheriff, James Lujan of New Mexico, flashing what appeared to be a white nationalist hand sign. The controversial photo adds to the list of disconcerting incidents where white supremacy affiliations—in positions of authority—have made news headlines this month.

The since-deleted photo was posted to the account of his wife, Julie Casados. The family selfie shows the grinning sheriff standing behind his wife and two sons proudly displaying the upside-down “OK” gesture. The Anti-Defamation League has labeled the gesture a hate symbol after its association with white power following a 4chan internet hoax that aimed to trick the public-at-large that the symbol means “wp.”

Lujan has a history of racial discrimination that gives credence to the photo’s insidious intention. According to the Santa Fe New Mexican, in 2015, the sheriff was slammed with a lawsuit from former lieutenant Marvin Amijo for racial discrimination, sexual harassment, and violations of the Whistleblower Protection Act.  The lawsuit stated that Lujan would frequently comment about “Armijo’s dark skin color.”

He denies that the gesture was linked to white supremacy, however, according to Newsweek. Lujan said that he was playing a “slug bug”-like game where if you get a friend to look at the circle, you get to punch them.

On Dec. 14, a similar case involving the military occurred when cadets flashed the same upside-down OK gesture on national television during ESPN’s pregame broadcast of the Army-Navy football game. According to NPR, the U.S. Military Academy at West Point sent out a statement this week that announced it has wrapped up its investigation and concluded that the cadets were innocently “playing a common game.”

“They are well aware of what they are doing and think it’s funny. Disgusting. #ArmyNavyGame,” stated @BruthaManTho.

The military statement also added that although the cadets’ actions were not “linked” to “extremism” they will still receive “appropriate administrative and/or disciplinary actions.” No details about the exact course of discipline were disclosed to the public.

Similarly this month, a leaked photo put the West Virginia Division of Corrections and Rehabilitation officers’ training program under scrutiny. The photo was captioned “Hail Byrd!” and captured an entire graduating class saluting with the well-known Nazi gesture.

Since then an investigation has been launched and so far three of the cadets have been suspended.