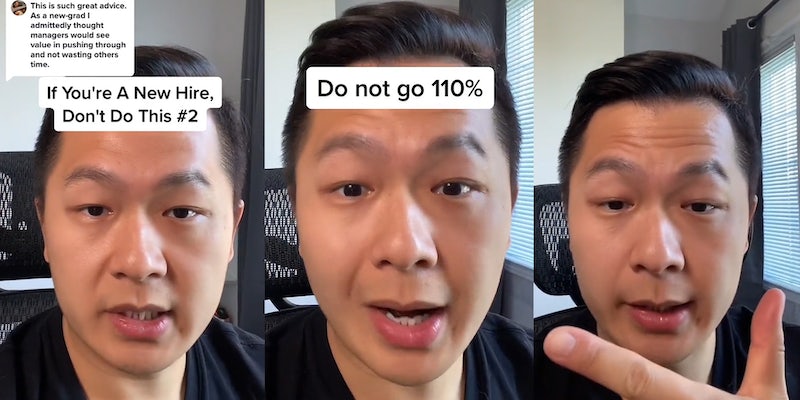 ‘Do not go 110%’: Tech worker says workers should not try too hard at new job, sparking debate

'And it makes you unpopular with the team.'

With the idea of “quiet quitting” sweeping the internet, many are rethinking their relationships with their jobs.

People in the United States work a lot. A 2016 paper cited by Fortune claimed that the average American works more hours than most European countries. Furthermore, they perform these long hours despite American workers’ generally low ability for economic mobility, per the Brookings Institute.

Hustle is simply part of the modern American working life, a 2016 article in the Guardian explains.

“In certain industries, particularly tech and finance, overwork has become embedded in the culture as competition grows to remain at the cutting edge of innovation,” author Alison Moodie writes. After all, as she explains, “it’s generally cheaper to pay an employee overtime than it is to hire more people for the job.”

Now, however, a TikToker went viral after sharing some advice for new employees considering “going the extra mile”: don’t.

In a video with over 230,000 views, tech industry TikToker Phong (@phong.thieu) explains why going too hard too fast can end in disaster.

The reasons for holding back are simple. New employees tend to put in extra work in an attempt to impress their colleagues and bosses. They also might assume other responsibilities and put in extra hours for the same reason.

Phong says, doing this “all leads to one thing”: “Burnout.”

Phong says that he recognized this pattern of overwork-then-burnout after seeing several employees’ productivity fall off after their probation period. Encouraging them to give 80% at all times instead of 110% for a few months as well as learning their communication, he says, allowed him to have a happier, more consistent workforce.

“It’s a marathon, not a sprint,” he cautions new employees.

In comments, users backed up this idea, citing their own positive experiences with this mentality.

“My last manager definitely protected my time a lot! And in general protective of our time and mental health,” recalled a user. “Really appreciated it.”

“Great [advice]. When I was a new manager, I was asked ‘boss, can you please slow down, we are all very tired’. That’s when I learnt this,” a second added. “Burning out is way worse subsequently for both individual and the team.”

In addition to this, some users noted that giving 110% early on can have other drawbacks.

“It also sets an unrealistic expectation. What happens when your manager is used to you giving 110% but you’re now at 95% and want a promotion?” asked one user.

“And it makes you unpopular with the team; you won’t get invited to hangouts, you won’t get a good peer appraisal, your mistakes will be picked on,” a further user claimed. “If you wanna go hard, go hard in building foundation and skills…”

The Daily Dot reached out to Phong via Instagram.