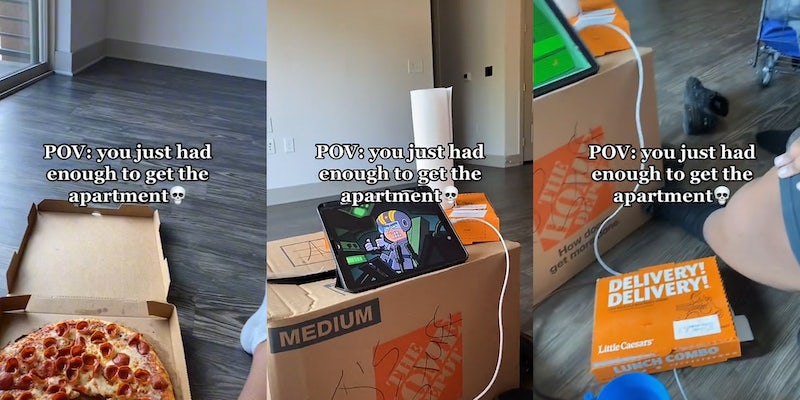 ’Food and shelter, you winning’: Woman moves into new apartment and has no money for furniture, sparking debate

'You had enough for pizza tho, that’s a win.'

In a viral video, a woman shares her struggle affording furniture after moving into her new Texas apartment, prompting discussion about the affordability of housing.

“POV: you just had enough to get the apartment,” TikTok user Keyy (@keythebratt) wrote in the TikTok’s overlay text. She films herself eating pizza on the apartment’s floor, using a Home Depot box as a stand for her tablet.

“Mannn this place gone have a echo for a good minute,” she added in the caption.

Keyy’s video has been viewed over 3 million times as of Friday, with thousands of commenters sharing their support.

“Listen, that’s all you need RN, everything else will come after,” one user wrote.

“You had enough for pizza tho, that’s a win,” another said.

“At least you got over the hard part [fingers crossed emoji] congratulations to new beginnings,” a third congratulated her.

A further TikTok user noted that the costs often required to secure housing can leave little money left over to furnish a place. “Between security deposit, first months, sometimes last months…i don’t blame you at all lol,” they said.

Many users also shared their own struggles with moving into their first apartment and offered advice.

“When I moved into my first place on my own all i had was an air mattress and those outside folding chairs,” a user shared. “Everything will come together w/time.”

“FACTS SIS!! When I got my first apartment I didn’t have a couch for four months. But my rent was paid though,” another commented.

“I started off with an air mattress and a few piece of furniture from Walmart. Don’t worry. You’ll get what you need and things will fall into place,” a viewer wrote.

In a follow-up video, Keyy thanks viewers for their unwavering support and says they scraped up just enough for the Little Ceasar’s pizza in the viral video.

“This is a very humbling experience,” she says. “Slowly but surely we are going to fill this place up.”