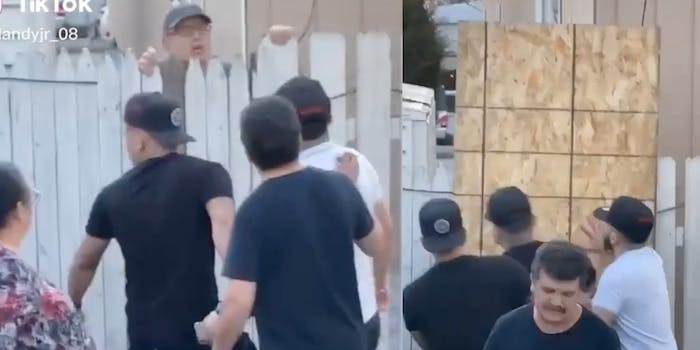 Video: Family blocks neighbor with ‘border wall’ after he gets upset over their Mexican music

A TikTok video has gone viral showing a Mexican American man putting a “border wall” between his backyard and his neighbor’s after the neighbor allegedly complained about their Mexican music.

The video was posted by TikTok user @dandyjr_08, whose real name is Adrian Jr. Carrillo. The video has since gone viral, garnering 7.7 million views since it was posted on Tuesday. The video was also shared on Twitter, where it’s been viewed 93,000 times.

“Never let racist neighbors stop u from hearing mexican music,” Carrillo wrote in the caption of the TikTok video.

Carillo, who put up the wooden wall, told the Daily Dot he shared the video online to show people “how to handle racism with out violence.”

He said the incident took place at his parents’ house on Easter Sunday.

“My dad was next to the fence when he [started] saying to turn that off ‘you fuckin’ Mexicans go back to your country’” Carrillo said. “That’s when we stepped in to defend him.”

Carrillo said the neighbor then shouted “Fuck all of you” before leaving the scene.

Carrillo said, for the past three years, his parents have been living in the house in Melrose Park, Illinois, where the Hispanic community makes up 75% of the total population. This type of behavior is allegedly not new for the neighbor. In another instance, Carrillo said the neighbor banged at the door when Carrillo’s brother was practicing with his band inside the house.