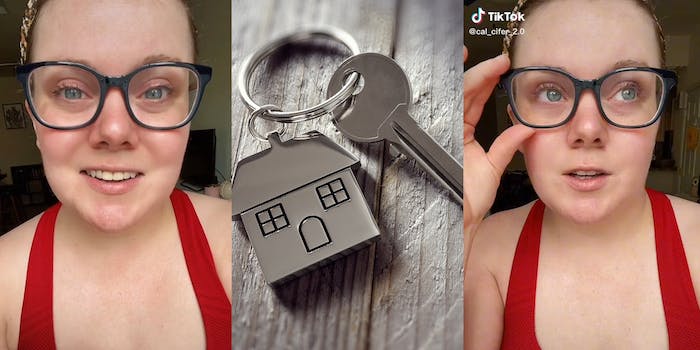 ‘Can they do that?!’: Woman says neighbor with same floor plan pays $600 more than her per month in rent

'Renting is a scam and unfortunately most us don't get a choice.'

Rental prices across the United States are going up. In the last year, rents went up by an average of over 11%, according to the Washington Post. In some cities, the average rental price increase has been even higher, with cities like New York reporting price increases of over 40%, per The Guardian.

Furthermore, in many cities, landlords are not prohibited from dictating their own rental costs, even if they are higher than market value—or what other people are paying in the same building for the same units.

An alleged example of this recently went viral on TikTok. User Callie (@cal_cifer_2.0) claims that her neighbor approached her and asked about her rental price. When she revealed her rental price to her neighbor, the neighbor was shocked. According to Callie, her neighbor pays about $600 more than her per month for apartments with the same floor plan.

Callie claims that when she moved in three years ago, she paid about $1,000 per month, but her rent has increased to just under $1,300. Her neighbor allegedly pays $1,900 each month.

“Can they do that?!” asks Callie in the caption.

To answer Callie’s question, most landlords in the United States can, in fact, do that.

While many cities have regulations about rental increases year over year, most do not have laws prohibiting landlords from charging whatever they perceive to be “market value” for new renters.

This has led to a dramatic increase in rental prices, even while wages have remained largely stagnant. As the afforementioned Guardian article reported, “between 2001 to 2018, renter incomes grew by 0.5% while rental prices increased by 13%.”

On TikTok, users generally agreed that this was legal—but morally wrong.

“Pretty sure it’s legal, yeah,” one user shared. “Renting is a scam and unfortunately most of us don’t get a choice.”

“Legal? Yes. Moral? No. It’s why they try to push long term tenant out when there’s a huge spike in rent, because they can get more money from everyone,” a second offered.

“They can charge as much as the tenant is willing to pay. They can only raise your rent so much each lease,” a third agreed. “It sucks but is legal.”

While most shared their sympathies, some commenters chastised Callie’s neighbor, saying that she would be better off living somewhere else or purchasing a house than paying rent.

In response, Callie posted a follow-up pointing out why this logic is flawed.

Many users were supportive of this position.

One commenter wrote, “People who don’t understand or live the struggle have no compassion.”