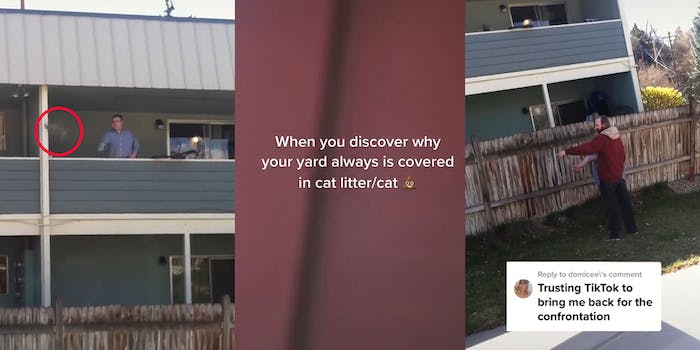 ‘How hard is it to scoop into a bag?’: Man throws cat litter into neighbors’ yards

'Get a slingshot and sling it back at him.'

A woman catches her neighbor dumping used cat litter in her and other neighbors’ yards in a viral TikTok video.

TikTok user Serra Elle (@serraelle) allegedly found “hundreds and hundreds” of bags containing cat feces in her yard for months until she finally caught her neighbor red-handed. In the video, her neighbor scoops used litter and throws it into her yard.

“When you discover why your yard always is covered in cat litter/cat poop,” the video’s text overlay reads.

In the video, the man flings seemingly used cat litter repeatedly from his balcony. “Living next to people is fun,” she added in the caption.

A follow-up video shows Elle and her husband confronting the neighbor shortly after catching him.

The neighbor then mentions something incoherent about “your side (of the yard).”

At first, her neighbor denies his actions and claims he’s “never done it,” saying he only throws it to pick it up along with another neighbor’s dog poop. However, he eventually apologizes.

After Serra Elle tells him she will be filing a formal complaint with the city, the neighbor offers to clean up their yard.

“Sorry about that,” he says in the video. “Do you want me to come clean it up for you?”

“Would really appreciate it because I’m allergic to it,” Sara Elle states. “It makes me so sick.”

Certain exposure to cat litter can pose health risks. Some cats carry a parasite called toxoplasma gondii, which they then excrete through their feces. According to a 2018 Teen Vogue article, the parasite has been cited as a “potential cause for sickness and negative behavioral changes.” Additionally, online pet resource WhatAboutPets claims certain substances and chemicals in the kitty litter can trigger allergic reactions in people.

Elle’s initial video received more than 5 million views and thousands of comments since it was shared April 17. Hundreds of viewers were appalled at the neighbor’s actions and suggested Elle retaliate.

“Get a slingshot and sling it back at him,” one comment with 35,000 likes suggested.

“How hard is it to scoop it into a bag? It’s the same amount of EFFORT,” another replied.

In the comments section, Elle said that while her neighbor apologized and cleaned up the mess at that moment, the problem persisted.

“I have moved as this situation did not get better,” she wrote. She also stated that the neighbor relocated as well.

After hundreds of viewers asked whether the TikToker ever officially filed a complaint, Serra Elle replied that the management at the college housing complex did not care. However, she did end up suing the neighbor.

“I’m letting the city, university, and eventually court handle things since landlords be slumlords,” she commented.