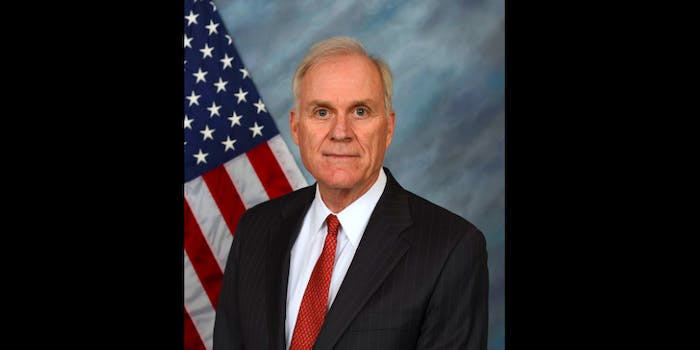 Photo via Secretary of the Navy/Wikimedia Commons (CC-BY)

‘All patriots’ should be able to serve, says new Navy secretary

Despite Trump saying that his transgender ban would do the military 'a favor.'

Newly confirmed Navy Secretary Richard V. Spencer told reporters on Thursday night that “any patriot” who wants to serve “should be able to serve in our military.”

Spencer’s comment comes on the heels of President Donald Trump doubling down on his tweeted-out ban of transgender troops last month, saying at a press conference on Thursday that he is doing the military a “great favor” with his yet-to-be-imposed ban.

While Spencer said on “a fundamental basis,” any patriot who meets the requirements should be able to serve, he also said that he will follow the president’s orders. “We will process and take direction of a policy that is developed by the [defense] secretary [with] direction from the president and march out smartly,” he said at a press conference after visiting Naval Station Norfolk in Virginia.

Spencer was confirmed earlier this month, a week after Trump’s transgender ban. At his confirmation hearing, he said, “I totally believe that policy should be developed at the [Department of Defense] level, and then discussed and socialized and deployed and then obeyed. We have to work together, including all our service people, to make sure that they are given what they need, whether that be spiritually, whether that be psychologically, whether that’s materialistically, to fight forward so that—so readiness is the key and lethality is the product.”

A day after Trump tweeted his trans military ban, the Pentagon put out a statement saying it refused to change policy until the president clarified his policy and sent a directive to the Department of Defense. Trump has yet to do so and, aside from tweeting and holding impromptu press conferences, is currently on vacation.