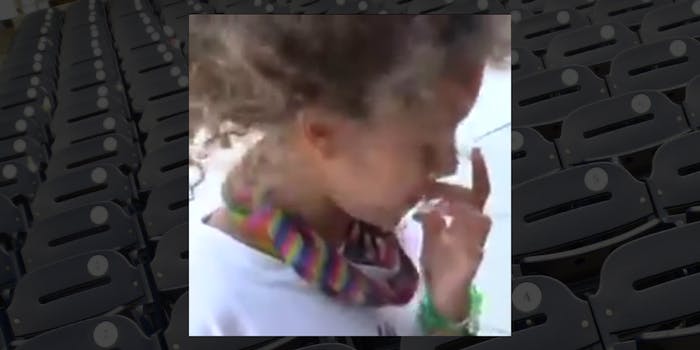 ‘I was kinda prepared because I’m always expecting something to happen’: Video of young girl nonchalantly describing her ‘second’ shooting breaks hearts

'This got me choked up more than most things could. What a bleak future.'

A young girl in the vicinity of the Nationals Park shooting in Washington, D.C., over the weekend said in an interview that she “was kinda prepared” for the horrific event because it’s already her second shooting—and a viral video of the interview shared online is leading people to respond with disgust and despair.

The video was posted to Reddit’s r/PublicFreakout subreddit on Sunday evening, following Saturday night’s incident, in which three people were reportedly shot after gunfire broke out between people in two vehicles outside the baseball stadium.

In the video, the girl appears to be describing what the scene was like in the stadium, saying, “I just saw people looking that way and I didn’t know what was going on until I heard someone say, ‘Get down,’ so I just started going under the seat.”

Then, the interviewer remarks, “Oh my gosh,” and asks, “How are you feeling?”

Then, with heartbreaking nonchalance, she says, “It was my second shooting. So, I was kinda prepared because I’m always expecting something to happen.”

According to the New York Times‘ account of the shooting, the game was stopped in the middle of the sixth inning due to the danger, and the usual post-game media availability was canceled for the night, with the game allowed to resume Sunday.

People inside Nationals Park were reportedly told “Please remain calm and remain inside the stadium,” though a police spokesperson maintained, “At no time during this incident were individuals inside the stadium attending the game in any type of danger.”

Reactions on the subreddit showed both a substantial level of sympathy for the girl and horror over the state of society when it comes to gun violence.

“This is so incredibly sad,” one said simply.

Another, less confident in a subreddit’s ability to feel and emote, remarked, “Yo, I know everyone here is gonna make some witty comment but fr this is actually just sad. Look at this little girl, not even near high school age and she’s already had multiple shooting events. Cynicism aside, this is tragic.”

Someone responded to that by observing, “She’s so nonchalant it hurts.”

Another labeled the U.S. as “a third-world country that acts like a first-world country,” opining, “So corrupt, racist, lacking healthcare, and you can buy a fucking gun at Walmart.”

And, as one other commenter assessed, “This got me choked up more than most things could. What a bleak future.”